ELIZABETH CITY – Bertie High’s girls basketball team opened with an offensive explosion and never looked back from there. The effort propelled the Lady Falcons to their sixth straight 2A Northeastern Coastal Conference basketball tournament title here Friday night. Bertie won with a 72-43 romp over rival Hertford County in the title game played at Northeastern High School. 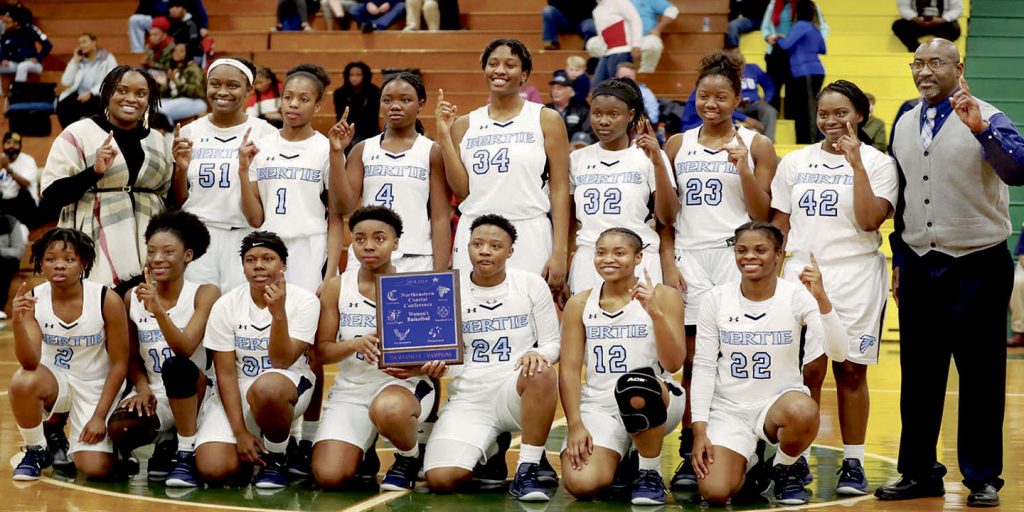 Members of the Bertie High School varsity girls basketball team pose with their tournament championship plaque after winning the title for the sixth consecutive season on Friday night on Elizabeth City. The Lady Falcons enter the start of this week’s state play-offs with a 23-2 overall record. William Anthony Photography

Dawaunti Combs and Akyia King set the pace for the Falcons with 49 points between them (25 and 24, respectively).

Opening with their smothering pressure defense, Bertie forced numerous early turnovers they in turn turned into points. With their fast pace they blew out to 22-6 lead after the first eight minutes over the stunned Lady Bears. Hertford County gathered itself better in the second quarter, only being outscored 15-to-10, but were still down over 20 points at halftime, 37-16.

The teams swapped buckets to begin the second half before Bertie seized control again. Bears freshman Desiree Askew who scored nine points in the first half, was held to just five in the second. Ahead 44-21, the Falcons went on a 10-0 run – eight of those points scored by Combs and King – that upped their lead to 33 points at 54-21. Hertford County had a short run of their own and got it under thirty by the start of the fourth quarter, 56-27.

Bertie got it back up to a 33-point advantage at 66-33 when Hayes pulled his starters. The Bears fought to keep the margin under 40 to avoid the ‘Sportsmanship Rule’ and the running clock. They succeeded in their valiant fight, as the largest Falcons’ margin was only 37 points as Hertford County closed the game scoring the final eight points in a row to fall by just 29.

Both teams qualified for the post-season along with fellow conference member First Flight (14-5). Bertie (23-2) is seeded second in the 2A East and can potentially play all three early round games at home. They opened at home Tuesday hosting West Bladen. The Falcons are bracketed with Hertford County (12-13), who were on the road at SW Edgecombe. Neither game was completed by press time. First Flight’s Lady Nighthawks had a road date with Croatan.