If those walls could talk 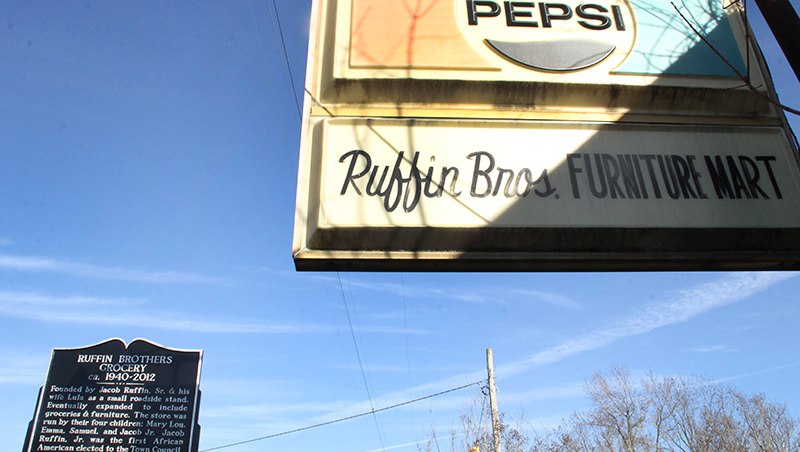 The past (an old Pepsi sign) hangs in the foreground in front of a new historical marker on the property of the now closed Ruffin Brother’s Grocery and Furniture Mart. Staff Photo by Cal Bryant

MURFREESBORO – If the walls of a long, single-story cinderblock building located here at the intersection of US 158/258 Business could talk, they would loudly proclaim a story of how hard work translated into a major success.

For nearly 60 years, Ruffin Brother’s Grocery and Furniture Mart stood the test of time. Founded by Jacob Ruffin Sr. and his wife, Lula, family members spent their time working and growing up within those hallowed walls. Brothers and sisters Mary Lou, Emma, Samuel, and Jacob, Jr. worked side by side with their parents, thus making the store the longest running business in Murfreesboro operated continuously by the same family.

Even though the establishment closed in 2012, its legacy lives on – so much to the point where a two-year effort to have a historical marker erected on the site of the store was completed with an unveiling this past Sunday afternoon. 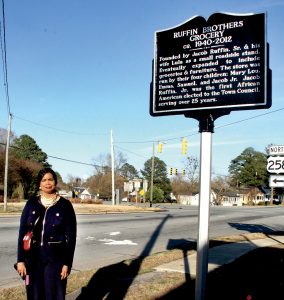 Jacquelyn (Jackie) Ruffin-Pittman, the granddaughter of the store’s founder, stands next to a recently erected marker that details the history of Ruffin Brother’s Grocery and Furniture Mart in Murfreesboro. Staff Photo by Cal Bryant

“We came up with the idea of a marker in January of 2017 to try to help tell the history and spur interest in saving the building,” said Caroline Stephenson, owner of the Cultivator Bookstore in downtown Murfreesboro. “It took several fundraisers (the Murfreesboro Black History Tour in June of 2018, a plate sale, and private donations) to raise the $2,500 needed for the marker. It took a village to do this, just like it took a village to support the Ruffin family over the years they were open for business.”

Jacquelyn (Jackie) Ruffin-Pittman, the granddaughter of the store’s founder, represented her family at Sunday’s ceremony.

“My family’s business was one that welcomed everybody,” she remarked. “They worked hard, often from 6 o’clock in the morning to 12 o’clock at night, and that was each and every day.

“I thank you all for being here today and for all your support on making this historical marker happen, especially Caroline Stephenson,” Ruffin-Pittman continued. “We’re still working on getting some funding to restore this building. We want to keep this legacy alive.”

Dr. Valerie Ann Johnson of the North Carolina African American Heritage Commission was on hand Sunday to witness the unveiling of the Ruffin marker.

“This is a historic moment for this town,” Dr. Johnson noted. “It shows the importance of African Americans in your history here.”

“It’s so important that we stand together to continue to celebrate our heritage,” he stated.

Former District Court Judge Alfred Kwasikpui used the occasion to reminisce about the time when he and his wife moved to the Roanoke-Chowan area 34 years ago.

“At that time I worked here in Murfreesboro at the District Attorney’s Office,” Kwasikpui recalled. “One of the first people I had the pleasure to meet back then was Mr. Jacob Ruffin and his great family. I saw the vision he and his family had. With all the store had to offer – groceries, meat, and furniture – this was a Walmart concept long before there was a Walmart.”

Stephenson recognized a former employee of Ruffin Brothers seated in the audience on Sunday, saying that Dallas Carter worked at the store for nearly 40 years.

“He is an incredible part of this legacy,” stressed Stephenson.

She also read several excerpts from a history of the store authored by local historical Alice Eley Jones:

“An ancient African proverb declares that ‘it takes a village to raise a child’ and Ruffin Brothers was our community’s father, mother, brother, sister, cousin, auntie and uncle who helped us raise bright, friendly children, and provided a welcoming place for us to rejoice in one another. A spirit place where good manners, good grades, and good news were greeted with a smile, pat on the back, and praises lifted to God and heaven.”

Jones’s historical account also referenced the store as a place for “hellos” and “goodbyes.”

ham, dan doodles and other Ruffin goodies. It was the good-bye and hello place for college students and those in military service to our country.

“Ruffin Brothers was our department store, courthouse, town hall, country club and newsroom,” she continued. “A place of deep political, community, legal discussions and gossip over souse, crackers and a soda. Informed voices discussed news of deaths, funerals, births, marriages, success stories, community troubles, church news, and the stories of young people, old folk and all those in between. Ruffin Brothers was like home, and it will always belong to us.”

Murfreesboro Mayor Hal Thomas told those gathered on Sunday that the historical marker dedication was just the start of more to come at this particular location.

“Everybody here remembers what it was like when Ruffin Brothers was open and we’re planning on keeping that dream alive. This is step number one of something happening on this corner since the store closed,” said the Mayor.

Thomas later said that the town is currently engaged in a process where they are seeking funds to construct pedestrian greenways, one of which will cross the property of the old Ruffin Brother’s store en route to a new area of development along the banks of the Meherrin River.

“This dream has come to fruition; this continues our rich heritage in Murfreesboro,” Stephens said.

The Ruffin name in Murfreesboro is synonymous with success. As an adult, Jacob Ruffin Jr. was the first African American to serve on the Murfreesboro Town Council, a position he proudly held for nearly 30 years until his death in 2009. His brother Samuel opened Ruffin Motor Company, located across the street from the family’s grocery/furniture store.

Editor’s note: Cultivator Bookstore and Kee Builders of Murfreesboro will host a clean-up day from 9 a.m. until 12 noon on Saturday, March 23 at the old Ruffin Brother’s store. All are welcomed to participate.