AHOSKIE – There are many customs and traditions people have on Valentine’s Day such as sending cards, flower’s, chocolates and other gifts. 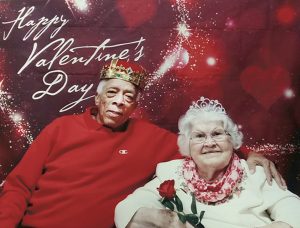 Troley Doughty and Joseph Lee were respectively crowned Queen and King during the second annual Family and Friends Extravaganza held Feb. 13 at Accordius Health at Creekside of Ahoskie. Contributed Photo

Accordius Health at Creekside now has their own tradition by hosting the second annual Family and Friends Extravaganza on Feb. 13.

Hosted by the Cupids Activity Team, the facility was decorated with hearts and love to set the atmosphere for the perfect night. Light hors-d’oeuvres were served from 5-6 p.m. in the main dinning room while Peele’s Photography was in the main lobby taking Valentine photos.

The food was delicious, and the photos were priceless for loved ones to cherish forever.

Johnny Ruffin Jr. provided special entertainment in the West Annex Dining Room from 6-7 p.m. He sang gospel and even some Stevie Wonder’s, “Ribbon’s in the Sky “. Ruffin’s music had the residents singing, clapping their hands, tapping their feet, and even a few were dancing.

During the music hour, the Valentine’s King and Queen of Creekside were crowned. A voting box was put in the front lobby three days prior to the event for residents, staff, family and friends to cast their ballots. This year, residents Troley Doughty and Joseph Lee were respectively crowned Queen and King. Everyone was thrilled and showered them with love and well wisheses.

Creekside’s 2019 King and Queen will have the responsibility of being in the National Nursing Home Week parade in May. This gives everyone something to look forward to.

Accordius Health at Creekside’s Family and Friends Valentine’s Extravaganza was truly a success where the residents had a night to live, laugh and love like the “Young at Heart.”