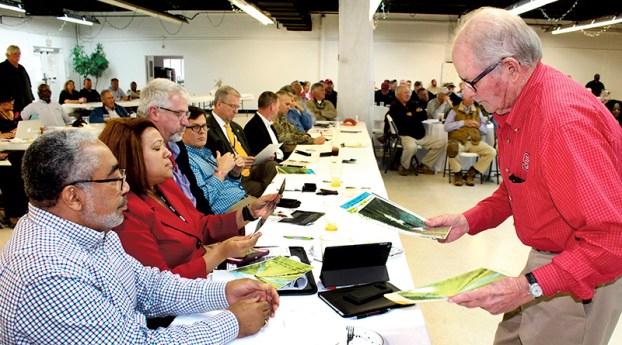 WINDSOR – Army Colonel Robert Clark has come under fire before during his distinguished military career.

At the Cashie Convention Center here Thursday they were lobbing a different sort of ammo.

Clark is Wilmington District commander of the U.S. Army Corps of Engineers (USACE), and he came to Windsor to both speak to and hear from property owners and others with an interest in the lands along the Roanoke River. Lands that have been inundated with high water in the Roanoke River basin since early in 2018, or sooner over the past three years.

The Corps is responsible for flood control in the Roanoke River basin and in turn decides how much water flows out of John H. Kerr Dam and into the river further downstream. At 320-321 feet – the brim for Kerr Lake Dam – the Corps of Engineers, which owns and operates the dam, is required to release 85 percent of water still flowing into the lake. When water levels rise above 321 feet, the Corps goes into Flood Operations and must release 100 percent of the water flowing into the reservoir. That release amount is generally between 28,000-35,000 cubic feet per second (CPS). That means it affects lands along the river to the Albemarle Sound.

“The impacts of flooding (along the river) is a disaster that continues to ruin our croplands, disrupts timber production, and results in the loss of hundreds of thousands of dollars with support our farmers and residents in Bertie County and neighboring counties along the (Lower Roanoke River Basin),” said Bertie County Commissioner John Trent, who welcomed participants to the gathering.

In addition to Trent and the entire Bertie Board of Commissioners, other participants included 3rd District NC Senator Erica Smith, who served as moderator, as well as representatives of the eastern Carolinas D.C. Congressional delegation, and Army Corps of Engineers personnel.

“We use these waters for everything from hydroelectric power to farming to recreation along these 5,500 acres from eight counties and Virginia,” said Smith. “And the most important stakeholders I work with are the ones who lead this state in North Carolina’s number-one industry, agriculture, to the tune of $84 million. This is what makes North Carolina work.”

Smith said her hearing more from farmers is what spurred the organizers to hold this meeting.

Thursday’s gathering was a larger forum than the less than 10 persons who met together earlier to discuss flooding back in January, attracting close to 200 persons; some from as far away as Virginia.

“We wanted to involve all five counties on the river that are affected and to see what alleys we need to take to make this better for everybody,” said Cooper.

Next came testimonials from farmers, Fish & Wildlife personnel, hunters and fishermen, and timber concerns. John Griffin, a Lewiston-Woodville farmer with cropland on Weeping Mary Road by the Roanoke, says he has some 1,400 acres of farmland that are adversely affected.

“Colonel,” he began, as he addressed Clark, “we just can’t stand 35,000 cubic feet per second down here; it’s too much water and it ruins our whole way of life. I can’t speak for everybody, but we can live with 24,000 (cfs), but what we were told is not what’s been happening. Now we’ve got enough people here to affect change, but we need to know how.”

Some six or seven agri-businessmen spoke: one forester said 8,000 of his 20,000 acres of timber were affected; while another said his timberland has been underwater for the past five months. A Virginia resident said he has cut wood from last fall that is rotting in the elements because he cannot remove it from his bottomlands due to high waters.

Smith returned to say that while federal infrastructure – dams and levees – work as designed, there can still be major flooding.

“I don’t want anyone to think that the flood plan we have does not work,” Smith said. “They may work as intended, but they did not stop the flooding.”

Local infrastructure, she acknowledged from a presentation before the General Assembly’s Stormwater and Flooding Control Committee, was insufficient, incomplete, and unreliable.

“But it’s the third point that brings us here,” she stated. “We now have to have the political will to come together on the local, state, and federal levels and come up with a plan to change the protocol on the release of water, but it won’t happen until we have these public meetings bringing all the various stakeholders together, which is what Chairman Trent has done here today.”

Col. Clark then stood; acknowledging the work of the Corps through its history.

“I wish it was that easy as doing this-and-that, but it’s not,” he admitted. “You’ve got an 800-mile stretch of the Roanoke River covering over 9,000 square miles of drainage basin. The issue is not that we’re flooding you, but to what degree are we reducing the lake level … I can’t stop flooding everywhere, but I am trying to reduce it.”

Clark recommended working with local, state, and federal officials and look for other comprehensive flood-risk and mitigation solutions. He admits not being in charge when the 2016 flood plan study was conducted.

“The new plan puts more burden on the farmer,” he acknowledged. “It’s water out faster, less time on the ground; but what I’m hearing is that’s not happening.”

Clark says there are multiple purposes on the lake and with that comes multiple stakeholders; the lake level cannot go over 320 feet, and then there’s the river and the relationship with the farmers, balancing the needs and wants of all the stakeholders.

“That’s why a solution is not that simple,” he related.

“The river pulses,” the professor said. “And in our climate with late summer tropical storms, it doesn’t matter if they come up from the Gulf Stream or rage along the Atlantic, every one of those storms’ funnel systems, about 75 percent, are predictable. The ‘super problem’ is so much water came in from both Florence (Atlantic storm) and Michael (Gulf hurricane). Add to that all these frontal systems we’ve had in the fall and winter with about two inches of rain per system and it’s a cumulative impact.”

Riggs said despite areas of the river basin not taking a direct hit from any of the 2018 storms, there’s an ebb and flow to the river water chart.

“During (tropical weather systems) Julia and Matthew, you had 18 feet of flooding,” Riggs said. “That’s when they (Corps) started letting the (Kerr Lake) water out, which was natural for the ecosystem.”

Clark vowed to look at the new data.

“We’ll try to overlay it on what we already have, take a look at it, and see what that tells us,” he concluded.

Clark also requested any of those present that had new data to submit it through their local channels.

Smith said an impact report would be compiled with reference to damages suffered by landowners and that it needed to be completed by April 4.

The next Roanoke River flooding meeting has been tentatively scheduled for the third week of April; after which, when the data is assembled, a comprehensive report would be presented to the General Assembly’s Stormwater and Flood Control Joint Committee.

“We need this so we can start cracking with some legislation,” added Smith. “This will be an assessment/impact study of the issues and how we may best resolve them.”

WINDSOR – A second suspect in a January shooting at a Merry Hill birthday party has been captured. Jashawn Brown... read more