SUNBURY – Since the age of 19, Erna Bright has enjoyed the opportunity to serve his fellow man.

Earlier this month, the now 65-year-old was justly recognized for a lifetime of service. 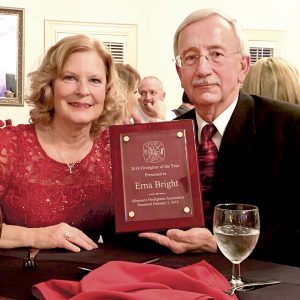 Veteran Sunbury firefighter Erna Bright, shown with his wife Rachel, proudly holds the 2018 Firefighter of the Year Award as presented earlier this month by the Albemarle Firefighters Association. It marked the first time ever that a Gates County fireman has received this prestigious honor. Contributed Photo

Bright, the longtime Safety and Training Officer at the Sunbury Volunteer Fire Department, was honored as the Albemarle Firefighters Association’s (AFA) Firefighter of the Year Award for 2018. The recognition came at the AFA’s annual Fireman’s Ball, which serves a dual purpose as a fundraising event for the organization’s scholarship program.

The event was held at the Albemarle Plantation Golf and Country Club, located near Hertford in Perquimans County.

“It was a first for us; the first time a fireman from Gates County has been honored as the Albemarle Firefighters Association’s Firefighter of the Year,” said Sunbury VFD Chief Keith Modlin. “I’m happy that Erna was recognized with this honor and proud that a Sunbury fireman won it.”

Modlin said the AFA covers 44 fire departments in 10 northeastern North Carolina counties. Along with Gates, the other counties represented in the organization include Bertie, Camden, Chowan, Currituck, Hyde, Pasquotank, Perquimans, Tyrrell and Washington.

“Applications are submitted for the Firefighter of the Year award and the judging is done by a department that’s not in the Albemarle Association,” Modlin explained. “This year’s applicants were judged by the Williamston Fire Department.”

For Bright, the award was the icing on the cake for his 46 years of service as a volunteer firefighter. He initially volunteered as a teenager at the Elizabeth City Fire Department and has served the Sunbury VFD for the past 38 years.

While he said he was honored to be recognized as well as being the first Gates County firefighter selected to receive the award, Bright chose to talk more about the importance of volunteer service rather than the AFA recognition.

Over the course of his near half-century of service, Bright has answered numerous calls for assistance.

“I’ve seen some big fires, small fires, and bad wrecks,” he noted. “You gain knowledge from all those calls and you pass along that knowledge to better prepare other firefighters for what they may encounter during a call.

“I also like to visit other fire departments to see what type of equipment they have and how they do things. I bring that knowledge back to our department here in Sunbury and we use it to make ourselves better,” he added.

He is also keenly aware of the money it takes to operate a rural fire department.

“I’ve spoken with our county commissioners about those costs – which includes not only purchasing trucks and other equipment, but the annual tests performed on that equipment,” Bright said. “Other costs that impact us and other fire departments are insurance, turnout gear (helmets, fire-retardant coats/pants, boots), air packs, and radio equipment. I also stressed to the commissioners about how a fire department’s ISO rating impacts homeowners insurance….the better your rating, the lower the insurance costs.”

Bright has his Level II firefighter certification, and has attended (and holds certificates) classes for Hazmat training; safety driver training, FEMA grant writing training (for which he has successfully gained valuable funds for the Sunbury VFD), and has passed specialty training in the event that his department is needed on calls involving explosive devices and meth labs.

“And you know what, it’s still fun for me at age 65. I hate to see a fire, but when we arrive and put our training to work to save property and save lives, it makes you feel good,” Bright concluded.

WINTON – A Murfreesboro man accused of murdering an Ahoskie convenience store clerk in 2016 will spend the rest of... read more