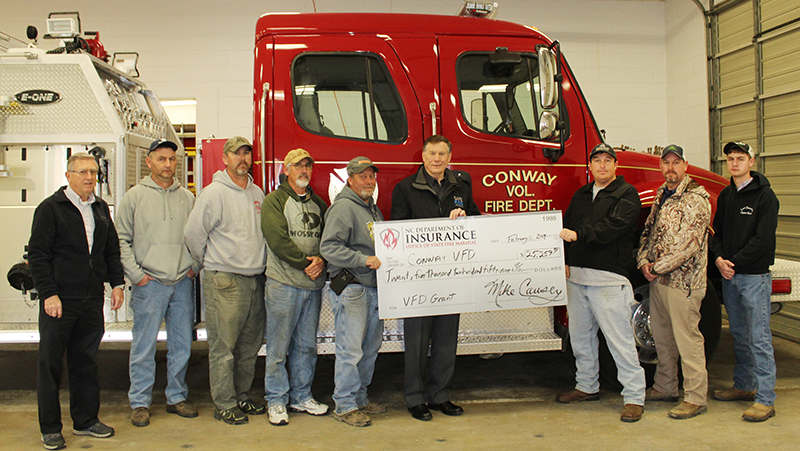 “If you ever get a situation where you need help with something, let us know and we’ll see what we can do,” Causey said as he addressed members of the local all-volunteer fire department.

Causey regularly visits various fire departments and insurance agencies across the state as a way to reach out to the citizens and learn more about their needs. The North Carolina Department of Insurance regulates the insurance industry, provides assistance for insurance-related complaints, investigates insurance fraud, and more. Additionally, the department also houses the Office of State Fire Marshal which helps train fire and rescue personnel, provides information about fire safety, and oversees building codes and inspections.

One of Causey’s main reasons for Tuesday’s visit was to present a ceremonial check to the Conway department for a matching grant they received last year. The total amount was for $25,259.85. According to Conway Fire Chief Albert Vann, the money was used to purchase items such as extrication equipment, turn out gear, portable lights, and more.

Vann said they were very appreciative of both the grant funding program and Causey’s visit.

“It’s just an honor when we can present that kind of check to a department this size. It’s a tremendous help,” Causey said, speaking to the News Herald afterwards.

The Department of Insurance’s matching grant program, Causey explained, gives away million of dollars each year to fire departments to improve firefighter safety. Fire departments across the state submit applications specifying the intended use for the money, and then have to raise an equal amount themselves.

“Obviously we have to have fundraisers. The funding is a major issue for small volunteer fire departments. Conway is a non-tax department. We have resisted trying to go tax because it’s an additional burden on the taxpayers. None of our firemen are paid anything,” Barrett said during the department’s dialogue with the state insurance commissioner.

One of Conway’s most popular annual fundraisers is the Womanless Pageant, coordinated by the Fire Department’s Ladies Auxiliary. They invited Causey to attend this year’s pageant which will be held on Saturday, Feb. 23 at 6:30 p.m. As of Tuesday, they said there were less than 50 advance tickets still available for the event and none would be sold at the door.

Recruitment was another topic Causey discussed with the members of the Conway department.

“It’s getting harder and harder every day,” Vann said, pointing to problems such as young people moving away from the area.

Barrett added Conway’s department in particular had been a bit luckier in regards to recruitment and retention than other local fire departments, but it was still an issue they all faced.

“We’re working on it,” Causey stated. “We’re working as hard as we can on educating the public. We need to do more on the state level to help the counties.”

The insurance commissioner said he was continuing to work with the state legislature on additional funding and support for rural fire departments. He also emphasized the importance of implementing junior firefighter or cadet programs to help combat the recruitment drop which is affecting departments all across the state.

Earlier that day, Causey visited the Gaston Volunteer Fire Department. He described it as “one of the model fire departments in the country for cadet programs,” referring to Gaston’s junior firefighter program. He praised the Gaston department for their success, noting a few national accolades they have received in the past.

In addition to his visit, Causey encouraged anyone with questions about insurance to reach out to the Department of Insurance office through their toll-free line (855-408-1212) for assistance.