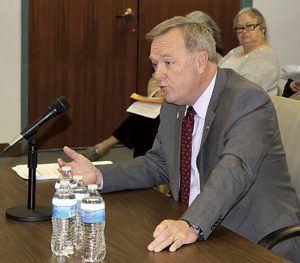 NC State House District-1 representative Ed Goodwin briefs the Bertie County Board of Commissioners on the current legislative session and priorities in Raleigh during a Commissioners’ work session Monday in Windsor. Staff Photo by Gene Motley

“I think there’s an optimistic air in the House and in the Senate,” Goodwin stated. “I’m the rookie – the freshman – and I tell them there’s a lot I’d like to get done, but you have to prioritize.”

“I don’t have to tell (Bertie County) this, but we’re flooding more now than we have in my entire life,” the Edenton resident said. “It’s worse in Washington and Tyrell counties, but I want everyone in the East to join in with me. I think we can do it for the district, and others can help us pass this if we can get it to that point.”

Goodwin said he also sees concern in the Information Age of communication in the district, particularly with reference to broadband.

“In the near future, we won’t have textbooks for our children,” he observed. “Most everything will be done on a hand-held device, and how can we do that if we don’t have broadband in all these counties.”

Goodwin says some telecom companies claim if one person within, say, a zip code, has broadband, then that region becomes a ‘served area’. He says that with the current rules, the laws, and the economics, things need to change.

“When I talk to the (electric) co-op headquarters in Raleigh, they’re all ready for it,” he noted. “And there’ve even been some tests done in Bertie County to show that it works.

Goodwin was referencing the “Roanoke Connect” fiber optic network which Roanoke Electric Cooperative launched as a pilot program to test how the network could be used to bring high-speed internet to its co-op member-owners; an important step toward bridging the digital divide in northeastern North Carolina.

“There’s still an urban and rural divide,” he maintained. “In Raleigh they don’t like to hear that but it’s true. And I say you’d better be trying to catch us up now, because five to ten years from now, the costs will be astronomical.”

“This is something that discriminates against rural areas, and we’ve got to get people in the House to thinking about rural when it comes to development,” Trent said.

Trent also asked Goodwin to be aware of how Bertie and other counties served along the Roanoke River face flooding danger based on the Army Corps of Engineers’ outdated data on water release from the Kerr Lake Dam. He pointed to the $176,000 spent on maintenance to Weeping Mary Road in western Bertie after seven floods compared to $37,000 spent on NC Hwy 11.

“You’ve got farmland and timberland affected,” he acknowledged. “If we keep getting hit with more like this, we’re not going to make it.”

Commissioner Wesson informed him about the $2 million financing earmarked for teacher housing in the county thanks to State Employees Credit Union Foundation; but there’s a delay until authorization can come for the proposed units to be managed by the Windsor Township Development Commission via a Senate Bill sponsored by 3rd District Senator Erica Smith.

“It impacts the recruitment and retention of new teachers for Bertie County,” Wesson said. “And we need support for this in a bi-partisan way.”

Goodwin heard from Commissioner Tammy Lee on examples of other broadband expansion in similar communities such as Mt. Olive in Wayne County, while Commissioner Ernestine Bazemore voiced concerns over the lack of broadband use and ability by senior citizens.

Goodwin said he was there to listen, and made the Commissioners a pledge.

“This is something I want to take in and take on,” he commented. “I can’t say for sure, but I’m going to give it my best. If I write a bill, I’m going to do my best to push it in committees I sit on.”

Goodwin said his third project – and he branded it a ‘long shot’ – is an inland ferry system from Dare County through the Albemarle Sound and other adjacent inland waterways.

“There’s interest, but also naysayers,” he emphasized. “But the naysayers were the ones who also said a passenger ferry from Hatteras to Ocracoke would never work. Now think of what the economic impact has been with that passenger ferry has done for that area; that’s impressive.”

Goodwin closed by informing the Commissioners of the five House committees he serves on in his first term: Agriculture Appropriations, Insurance, Transportation, Environment, and Capital Appropriations.

“I thought these committees were the best to serve our constituents,” he said.

Goodwin pledged to be available for the Commissioners on their trips to the legislature as well making a return trip to Bertie County in the future.

“I’m just a short drive away, and I appreciate you taking the time,” he concluded.

Out of the red, into the black