AHOSKIE – He was a leader, a teacher, a healer, and noted historian.

But most of all, he was a friend to many.

A little over one week has passed since Wayne Mackanear Brown, Principal Chief of the Meherrin Nation, drew his final breath in this world. He died peacefully at the age of 70 on Feb. 7, surrounded by family. 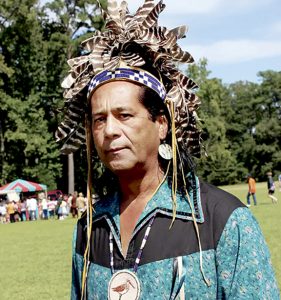 Wayne Mackanear Brown, Principal Chief of the Meherrin Nation, passed away on Feb. 7 at the age of 70. Contributed Photo

He loved his family and his Native American heritage and pursued both passionately. In 1975 he placed an ad in the local newspaper, seeking Meherrin Nation descendants. He re-organized the Meherrin Nation in 1975 and became the first chief under the newly formed government since the 1800s. This led to the endeavor of gaining state recognition in 1986 and the pursuit to obtain federal recognition for the tribe.

In 2008, following a notable career with the Virginia Department of Corrections, Brown was elected Principal Chief in a general election by Meherrin Nation tribal members. Chief Brown instituted many beneficial programs for the Meherrin Nation and facilitated the return of traditional Iroquois cultural practices to our community.

His passion to bring local, state and national attention to Native American history and culture was duly noted during his funeral service, held Feb. 10 at Garrett-Sykes in Ahoskie. Those sharing words of comfort included Michael Jock, Mohawk Nation of Akwesasne, Denise McAuly and Elder Stanley Mayes. Rev. William Reed led the Eagle Feather Ceremony. Eagle feathers are the highest honor bestowed upon an American Indian for individual acts they do to benefit the people.

Passing by American and North Carolina flags flying at half-staff, as ordered by North Carolina Gov. Roy Cooper, the funeral motorcade, en route to the Brown Family Cemetery following the service, made one final pass through the Meherrin Nation tribal grounds, located off NC 11 between Ahoskie and Murfreesboro. A fitting tribute to a man who had rekindled the fire under his tribal family and led them to statewide recognition.

In its interview series – “Meet Native America” – the Smithsonian National Museum of the American Indian published Brown’s story on May 8, 2015. Portions of that interview are as follows:

Where were the Meherrin people originally from?

According to Mohawk history, approximately 2,000 years ago the Haudenosaunee lived in the Great Plains alongside the great river called the Mississippi. Their closest friends and allies were the Pawnee Nation. For unknown reasons all the Haudenosaunee Nations, including the Meherrin, left and started a migration up the Ohio River Trail towards the Great Lakes. The Tuscarora, Meherrin, and Nottoway split off from their brothers and traveled down the Kanawha River. The Meherrin settled in what is now Emporia, Virginia.

“The first written account of the customs of the Meherrin people was made in 1650 when Sir Edward Bland visited the Meherrin Nation in their main village called Cowonchahawkon. Another turning point in the history of the Meherrin people came in 1680 when our Principal Chief Ununtequero and Next Chief Harehannah were the last chiefs of all the nations in Virginia to sign the Middle Plantation Treaty of 1677. Shortly thereafter they abandoned this village and started their migration to present-day North Carolina.”

How did your life experience prepare you to lead your tribe/band/Native community?

“My father tacitly taught me to be patient and tolerant of other people, to reason and think things through before speaking, and most important to show the utmost respect for women. My mother, grandmother, and aunts taught me to have humility, responsibility, and love of family, to treat my brothers, sisters and cousins not only as relatives but as my best friends. They also taught me about natural law—to learn from the animals and to follow the natural flow of things. The college and university where I matriculated and obtained my B.S. degree in Political Science and Social Studies and my Master’s degree in Social American History prepared me to deal with the world from man-made, human law. These two different sorts of laws made me understand the two different worlds that I had to live and function in. Natural law taught me a better way to communicate and deal with fellow human beings, regardless of their race or color.”

Are you a descendant of a historical leader? If so, who?

“When I speak to groups of people at special events, I speak of the great chiefs who were great orators as if they were my fathers. Thus I consider them as my descendants. My mother, grandmother, great-grandmother, and great-great grandmother are historical leaders who fought to keep our heritage alive when most denied or did not know their culture. They are my historical leaders.”

How does your nation deal with the United States?

“This message is not meant just for the youth of my nation, but for the youth of all my brothers and sisters throughout Turtle Island: More than ever before, get an education to keep the culture alive. Become historians, attorneys, and anthropologists, so that we can write our own history from our ancestors’ perspectives. Do not let non-Indian people define you.”

The family of the late Chief Wayne M. Brown thank you most sincerely for your kind expressions of sympathy in their bereavement. They would also like to especially thank the staff and caregivers at Select Specialty Hospital Duke Regional.