WINTON – A Murfreesboro man accused of murdering an Ahoskie convenience store clerk in 2016 will spend the rest of his life behind bars. 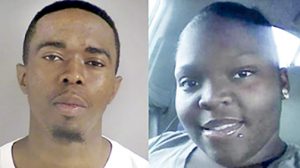 Earlier this week, Shakur Stephenson (left) was sentenced to life in prison without the possibility of parole for the Aug. 3, 2016 murder of Lakiesha Sutton (right). File Photo

On the heels of a seven-day trial that ended here Tuesday, a Hertford County Superior Court jury found 25-year-old Shakur Deandre Stephenson guilty of first degree murder. He was on trial for the homicide of Lakeisha Sutton. The 23-year-old woman was working as a clerk at Murphy Express in Ahoskie in the early morning hours of Aug. 3, 2016 when a verbal altercation, which led to gunfire, took place at that convenience store located on US 13 south adjacent to the Ahoskie Wal Mart.

Sutton reportedly went outside as a “peacemaker” before the shots rang out. One of the bullets struck her in the head. She died 16 hours later at Sentara Norfolk General Hospital.

After the jury reached its verdict earlier this week, Superior Court Judge Marvin Blount from Pitt County, who presided over the trial, sentenced Stephenson to life in prison without the possibility of parole.

The verdict and sentencing also included Stephenson being found guilty of two counts of assault with a deadly weapon inflicting serious injury with intent to kill Donald Outlaw and Antonio Holley; and three counts of assault with a deadly weapon with intent to kill Curtis Poulson, Jeremy Bayse, and Randy Rankins. Additionally, Stephenson was found guilty on the charge of discharging a firearm into an occupied vehicle.

“This was a senseless, brutal and unnecessary killing of an innocent young woman who had a young child,” stated Asbell in a post-trial press release. “I hope this verdict will send a message to our community that we will not tolerate intentional or reckless gun violence which was exemplified in this case or under any other circumstances.

The trial began Feb. 4 with jury selection. Evidence was presented until Monday, Feb. 11 with closing arguments given the next day.

The State presented evidence at trial, showing that Stephenson arrived at Murphy Express around 1:15 am on Aug. 3, 2016 about the same time as Poulson, Rankins, Holley, and Outlaw, who were in a GMC Yukon SUV. Evidence showed that prior to that date, Stephenson did not know any of the four men in the SUV.

Asbell said that Stephenson walked into the store and started a verbal altercation with Holley, who then walked back to his vehicle parked outside by a gas pump. Evidence showed that Stephenson continued to verbally argue with the other people in the SUV, especially Holley and Outlaw.

Meanwhile, Bayse, who was a customer in the store, came outside to see what was happening. At some point afterwards, Sutton also walked outside to the parking lot.

After a few minutes of Stephenson continuing to instigate the argument, Outlaw punched Stephenson in the face. At that point, Stephenson got in his vehicle and pulled away from the gas pumps. He steered the vehicle to the left and circled back around the gas pumps toward the SUV and began shooting a handgun, firing 10 shots at the five men and at the SUV.

The State provided evidence showing that one shot struck a fire extinguisher affixed to the outside of the convenience store while seven bullets hit the SUV. Four of those projectiles struck the right passenger side of the SUV; two hit the vehicle’s headlights; and one pierced the driver’s side passenger door.

In the process of attempting to flee on foot and trying to use the SUV as cover, two of the five men struck by bullets – Outlaw and Holley, who suffered non-lethal wounds. Asbell said she believes the fatal bullet that struck Sutton traveled through one side of the SUV and exited the other side.

Evidence showed that seven shell casings were found at the scene and three were later discovered in the vehicle Stephenson was driving that night.

Stephenson fled the scene and the local area. He was captured eight days later in Henrico County, VA. He was indicted in early September 2016 by a Hertford County Grand Jury.

“Although this was a lengthy trial, I am glad that this part of the criminal process is over for the family of Lakeisha Sutton. The family faithfully attended each day of the trial. We are continuing to pray for the family during this time,” Asbell said.

The District Attorney also had words of praise for local law enforcement for their thorough investigative work and for her Assistant DA.

“I would like to commend Detective Justin Farmer and Detective Stephen White of the Ahoskie Police Department on their excellent investigation and work on this case,” Asbell remarked. “I would also like to thank Assistant District Attorney Kim Scott. Mrs. Scott is an excellent prosecutor and her commitment to our community was exemplified in her work on this case.”

Lewiston-Woodville man dies in US 13 wreck