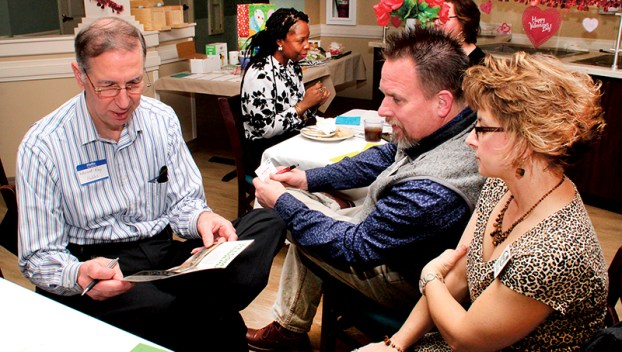 Edward Ray Hobbs (left) gains information on the business owned by Michael and Sherri McDaniel of The Carolina Center at Corporate Drive, an all-purpose meeting/wedding venue in Elizabeth City, at last week’s Gates County Chamber of Commerce dinner. The main focus of the event was ‘Get to Know’ local businesses. Staff Photo by Cal Bryant

GATESVILLE – How well do you know those you may see or meet on a regular basis?

Do you know how long they have been employed in their current job; or why they chose that particular profession?

If you were in attendance at last week’s annual Gates County Chamber of Commerce Membership Appreciation Dinner, you would know a lot more than you think.

Instead of having a traditional guest speaker, Chamber officials opted to stage a “Get to Know” event. Those attending the dinner, held in the lobby and dining room of Gates House Assisted Living, were asked to place their business card in a glass bowl prior to dinner being served. Following the meal, those cards were randomly drawn, two at a time, and each of those pairs sat down face-to-face and asked a series of pre-determined questions. Those answers were placed on a larger card and each pair had to stand and tell the audience about their “partner’s” life.

As each pair finished their presentations, they had the opportunity to visit a table full of gifts where they selected one of their liking.

The “Get to Know” event was extremely entertaining as well as informative.

Chamber President Ed Morgan thanked Chamber Board members Cheryl Paz and Susan Ward for organizing the evening’s festivities, to include the ‘Get to Know’ event.

“I think all of us learned a lot about each other tonight,” Morgan said. “One of the things we prioritized here within the Chamber was attempting to get our members more engaged and better understand each other. Supporting each other is what the Chamber is all about.”

As part of the annual meeting, Ray Freeman III, the Chairman of the Gates County Chamber’s Board of Directors, provided an update of several projects that are currently in the works.

“We started on this last year and are moving forward with it this year…..an event similar to the old Swamp Fest here in Gates County,” Freeman shared. “More details are to come about this event.”

Chamber Vice Chair Marie Allen also provided a few updates on Chamber-sponsored activities, to include Job Shadow Day on Feb. 26 where juniors and seniors from Gates County High School will visit job sites in the county and learn what goes on behind those doors on a daily basis.

“We typically have Job Shadow Day twice a year, the first one in February and another one in October,” Allen said. “Dan Askew (a Chamber member who works at Southern Bank in Gatesville) heads up that project.”

Allen also welcomed two new members of the Gates County Chamber – Jeannie Marcello who operates a dog grooming business (Nails to Tails) in Hobbsville; and Michael and Sherri McDaniel of The Carolina Center at Corporate Drive, an all-purpose meeting/wedding venue in Elizabeth City.

Allen also reminded the audience of a current fundraising opportunity for the Gates County Chamber. She said that through the generosity of Marshall Cherry of Roanoke Electric Cooperative, he has donated to the Gates County Chamber of Commerce two tickets and a parking pass for the Carolina Hurricanes vs. Tampa Bay Lightning NHL game to be held on March 21 at PNC Arena in Raleigh.

“These are great seats, two front row seats,” Allen noted. “The winner of the raffle receives the tickets, a parking pass, and the Chamber kicks in a $100 gift card that can be used for dinner before the game or to pay for gas for the trip to and from Raleigh.”

The drawing will be held at 12 noon on Friday, March 15 on the steps of the Gates County Courthouse.

Allen and all the Gates County Chamber officials thanked the staff, to include the cafeteria staff, at Gates House Assisted Living for their hospitality and the delicious meal.

The Gates County Chamber of Commerce was established in 2009 to serve as the leading voice in providing advocacy, promotion and opportunities for the business and professional community of Gates County.

The Chamber works to support the business and agricultural community of the county and works with local government to create and promote business opportunities that will establish long-term economic growth and prosperity. The Chamber strives to create an environment within the county that supports the local economy by buying local, builds a strong network of contacts and resources, and creates a spirit of community through various community and service events.

New members are welcomed by contacting Allen at the number shown above.

WINTON – A Murfreesboro man accused of murdering an Ahoskie convenience store clerk in 2016 will spend the rest of... read more