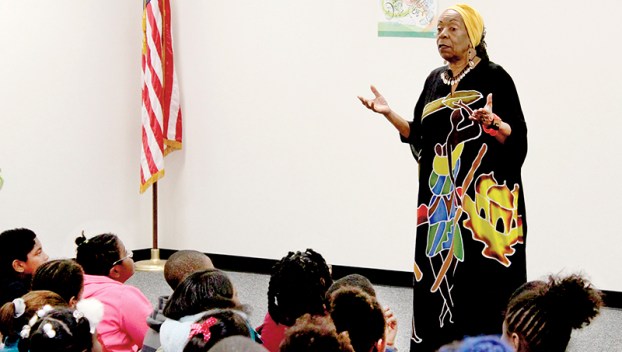 JACKSON – All eyes were focused on the storyteller as she weaved together folktales with words and body language.

“My goal as a former teacher, and as an actress and storyteller, is to send you to the library to read any of these stories you can find,” Grear told the audience before she began her performance, encouraging everyone to read as much as possible. “It is the easiest way to be the smartest person that you can be.”

Grear performed four stories including “The Chicken and the Crocodile”, “Why Frog and Snake Don’t Play Together Anymore”, “The Boy Who Cried Wolf”, and “The People Could Fly.” Many of the folktales are written down in books she urged students to read, but her performances were detailed and emotional enough that the students aren’t likely to forget them any time soon.

The storyteller embodied each character she portrayed, bringing out the happy, curious, sad, or angry emotions they felt within the story. Her laughter would echo through the room when one character was happy, and tears would stream down her face when another was sad.

After each story, Grear emphasized the lessons to learn from each and encouraged questions and discussion from the students. For example, “The Chicken and the Crocodile” passed on an important message about being kind to others. “The People Could Fly,” an African-American folktale, offered a look at the conditions of slavery and the hope for freedom.

Once her time was up, Grear requested the students write to her to grade her performance and let her know which stories were their favorites.

Northampton Library Branch Manager Pam Brett said afterwards she was pleased with the event’s large turnout and Grear’s performance. Grear has visited Northampton County previously, but this was her first time at the library in Jackson. Brett said the stories were important for everyone to know.

“We all need to know all of our history,” Brett said. “You can never learn too much.”

Grear, who lives in Wilmington, is a former teacher who later returned to graduate school for a theater performance degree. She got her start as a storyteller by doing performances as Harriet Tubman and sharing other stories in local schools. Now she travels around the country and sometimes internationally to perform.

“Basically, it all pivoted around my love of teaching children, trying to encourage them to read. It just evolved over time,” she explained. “It’s a nice combination of all the things I love.”

Grear said she usually has a captivated young audience at her performances, and this one was no exception.

“Kids love to hear stories and later retell them,” she said.

JACKSON – The identity of the alleged shooter involved in a Jan. 25 murder in Gaston has been revealed. Jacques... read more