WINDSOR – Holland Consulting Planners’ Chris Hilbert made his latest update to the Bertie County Board of Commissioners at their Feb. 4 meeting here on several NC Disaster Recovery Act (NCDRA) projects being undertaken within the county. 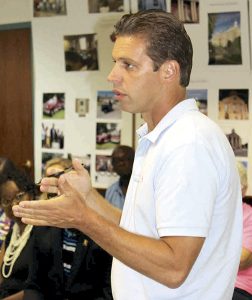 Chris Hilbert with Holland Consulting, shown here in an earlier photo, gave the Bertie County Commissioners an update last week on progress being undertaken on Hurricane Matthew recovery projects in the county under the state’s Disaster Recovery Act. File Photo by Gene Motley

The Commissioners also later approved a Memorandum of Agreement between the county and the state’s Department of Public Safety for the NCDRA-17 program administrated as requested by the Division of Emergency Management.

Back in the fall of 2018, the county began taking bids from general contractors for the rehabilitation of homes within the county that would be funded under the county’s NCDRA program, with both licensed and unlicensed contractors submitting competitive offer.

In all, Hilbert said there are 45 projects under review: 34 straight buyouts and 11 more that are marked for elevation.

“The biggest project is the buyout project,” Hilbert asserted. “We have received about 27 title opinions out of 34. We’ve got surveys and appraisals on 12 units, and we will be making offers on those dozen (homesteads) later this month, probably starting this week.”

Hilbert said once an accepted offer is in hand, closing would take place within 30 days.

“There’s got to be some financial transactions between the state, so we’ll really be ramping that up,” he added.

The planner stated there are nine more units for which appraisals and surveys have been ordered.

Hilbert also said one engineer has already been hired, and is under contract, for the rehabilitation and elevation of one unit, thanks to a successful bid.

“He’ll be starting this month on this first bid package, probably for five years,” he said.

“We’re recommending award to the two low bidders for both units, with approval contingent on approval by the state,” he noted.

Commissioners Chairman John Trent asked if other houses might be placed on the list if there is money left over from the $5,000,000 allocated and Hilbert said they were working on that.

“We will try,” Hilbert declared. “But the state’s got to approve and FEMA (Federal Emergency Management Agency) has to approve it. After we get through (with these) houses, we may be able to buyout some houses through some other programs as we identify them.”

Commissioner Ron Wesson, who serves on the Mideast Commission Board, said the MEC also has a program similar to NCDRA, with funding available.

“It’s doing some of the same thing (as NCDRA) if it’s under $40,000 for repairs,” Wesson mentioned. “We’ve already approved every house that’s cleared us and started construction. Two more have been submitted to us this week.”

“If they’re under 40-grand we can get to them almost immediately,” Wesson emphasized. “We don’t want (folks) to lose that money.”

Hilbert said the Memorandum, which will go back to the state, would help clear up some of the language.

“They were a little bit loose in their first amendment, but now they’re a little more specific,” Hilbert suggested.

Trent said there’re other funds, $1,000,000 worth, available for low-to-moderate income households of less than $50,000; but Hilbert informed him those funds fall under the NCDRA.

The Commissioners then unanimously approved the contractor bids on the two projects on US 13-17 be awarded to B&B Construction and Gilbert Everett Builders. Inc., and they also approved, with no dissention, the Memorandum of Agreement between the county and NCDPS on administration of the NCDRA according to state Department of Emergency Management standards.