Second arrest made in ‘moped’ murder

POWELLSVILLE – Bertie County Sheriff John Holley says a second arrest has been made involving the murder of Daryl Silver that occurred on Jan. 19 of this year. 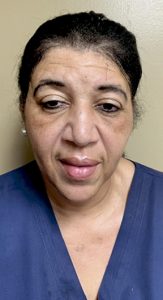 Sheila Annette Chamblee, 51, of 134 Daly Rd. in Powellsville, was arrested on Thursday of this week following a recent probe by the Bertie County Sheriff’s Office Investigations Division and the NC State Bureau of Investigations.

Chamblee is charged with accessory after-the-fact to first degree murder involving the death of Silver. She was given a $250,000 bond and will make her first appearance in Bertie County Superior Court on Wednesday of next week.

Ronald Dean Smallwood, 56, of Baker Street in Ahoskie has also been charged in Silver’s death. Smallwood faces one count of first degree murder after the decedent’s body was found lying along the roadside of Center Grove Road in Bertie County on Saturday night, Jan. 19.

Original reports from the scene that night said the operator of a moped had been found dead of unknown causes along the roadside.

Upon the arrival of law enforcement investigators, it was quickly determined that Silver died from a gunshot wound rather than from injuries caused by a vehicle accident that may have occurred while he had been operating his moped.

“We were able to develop Mr. Smallwood as a suspect through our investigation, which was aided by agents with the SBI,” Holley said.

The Sheriff added that the motive for the murder remains unknown, and is part of an ongoing investigation as the probe continues.

Smallwood was arrested Tuesday Jan. 22 at his Baker Street residence in Ahoskie by the Ahoskie Police Department, according to Holley. The Sheriff added that the APD made the arrest and immediately turned Smallwood over to Bertie County authorities.

Holley said Smallwood is alleged to have shot and killed Silver sometimes after 9 p.m. the night of the 19th. The Sheriff also said Silver’s age was somewhere in his 40’s, but his residential address was unknown.

Holley thanked his investigators, the Ahoskie Police, the SBI, and agents with the Down East Narcotics Task Force in making both arrests.