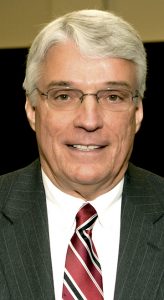 Robert “Bob” Murphy has over 30 years of experience as a county and city manager in both North Carolina and Virginia. Photo Courtesy of The Nashville Graphic

The Board of Commissioners convened in closed session during an emergency meeting held on Wednesday, Feb. 6. Following the closed session, Murphy was appointed the position of Interim County Manager by unanimous vote.

Murphy assumed the position effective at 6:45 p.m. that evening, taking over for Tyner who was selected to temporarily serve as Interim County Manager on Monday, Feb. 4 following the voluntary resignation of former manager Kimberly Turner.

According to a press release from Northampton County, Murphy has over 30 years of experience as a county and city manager in both North Carolina and Virginia. Career highlights include serving as city manager for Poquoson, Virginia from 1983-1996 as well as county manager for Carteret County from 1997-2001 and Nash County from 2001-2013.

Since 2014, Murphy held the interim county manager position in various counties including Caswell, Pender, Vance, and Warren. Most recently, he worked as the interim executive director of the Albemarle Commission Region R Council of Government, which serves multiple counties in northeastern North Carolina.

“We went out searching for the best that we could find,” said Tyner. “And Bob is coming to us with plenty of experience.”

Tyner explained Murphy’s experience working with rural and non-rural counties would be an asset to help move Northampton County in the right direction.

“For what Northampton County needs, we need new vision,” he emphasized.

The board chairman said Murphy was referred to them as a possible interim manager candidate through the North Carolina Association of County Commissioners. The Board considered other candidates but ultimately selected Murphy because, “he was the one who had the best qualifications as far as working with rural counties.”

Murphy’s appointment in the Interim County Manager position is slated to continue until June 30 while the Board begins a search for a permanent, full-time county manager. The Board also has the option to extend Murphy’s term as Interim past the June 30 date if both parties mutually agree in writing.

According to the contract between Murphy and the Northampton County Commissioners, Murphy will be compensated in the amount of $65 per hour with the anticipation that his work shall not exceed 32 hours per week unless he feels additional time is needed.

The contract also outlines the terms of Murphy’s reimbursement for expenses. The County shall reimburse him for “all reasonable expenses incurred” for travel, meals, and lodging required with business-related activities undertaken for the benefit of Northampton County. Additionally, Murphy will be paid mileage for his daily travel to and from his home in Rocky Mount to the county government offices located in Jackson.

The agreement between Murphy and Northampton County can be terminated for any reason whatsoever by either party with 10 business days written notice to the other party.

Second arrest made in ‘moped’ murder