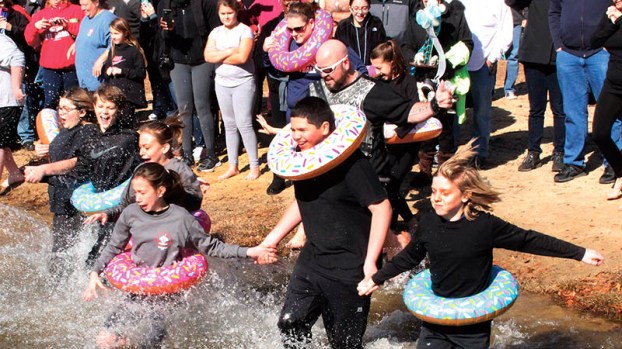 Individuals braved the frigid waters of Beaver Lake on Saturday where they helped raise money for Gates County Special Olympics by taking part in the eighth annual Polar Plunge. | Photo by Cal Bryant

EURE – Set against a cloudless blue sky, the sun glistened off the pristine waters of Beaver Lake here Saturday morning.

The towering pines and oaks sat motionless with no wind causing them to sway.

Below those mighty limbs were the sounds of children playing while adults engaged in friendly conversation over a cup of coffee and a breakfast sandwich.

It was a perfect day to take a dip into the lake. But in January?? Yep, the timing – and the frigid water temperature – was perfect for the 8th annual Gates County Polar Plunge.

Over 35 plungers, cheered on by 250 spectators who crowded along the shoreline, braved the frigid waters in an effort to benefit Gates County Special Olympics. Once final pledges are received and all the bills are paid, just over $8,000 will have been raised.

The event attracted local participants from Gates County as well as from the region (Ahoskie, Edenton, and Greenville). Others drove from as far away as Durham and Wilmington and from outside the state (Virginia, Maryland and Texas).

What made it a bit better for those taking a dip into the icy waters, and for the spectators as well, was the chili challenge. Without the promise of the delicious chili, prepared by those who donated their best recipes, the plungers might have thought otherwise.

Along with the annual chili challenge, members of Gates County Rescue & EMS were on hand to provide delicious breakfast items as well as hotdogs sold by Special Olympics.

The event kicked off at 11:30 a.m. with a beautiful rendition of the Star Spangled Banner by Lisa Hudgins, and the athlete’s oath led by Jessica Bradshaw. On hand to provide music for the event was DJ Lady J and her husband George of Elizabeth City.

The team skit challenge was a big hit this year and the competition made it hard for the judges once again. Winning the biggest trophy of the day, for Most Creative Presentation, was the Gates County High School Cool Candyman Crew. Winning for Most Creative costume was the Central Middle School Dunkin’ Donuts, and the Most Creative Name went to N’SYC SWIMMERS of TS Cooper Elementary School. Honorable mention went to Jummping for Jessie and Josh.

The winning teams received the Polar Bear Trophy, will comes back each year to be won again.

“A big thank you goes out to the team leaders for organizing their teams and to all those who donated to their teams to help them reach their goals,” said Polar Plunge organizer Barbara Toti.

“Much of the monies raised and support comes from our school teams who are a big part of the success of the event,” Toti added.

TS Cooper brought in the highest amount, just over $1,400 for their team.

“Another big thank you goes to the State Employees Credit Union’s Gatesville office for challenging the community to raise enough money to require Jonathan Jones (SECU Vice President) to take the plunge off the pier while wearing a woman’s dress,” said Toti. “Their goal was reached and then some, with over $2,800 being raised just to see him jump off the pier in his finest outfit. Many generous local businesses and vendors donated items that helped with the fundraising for his SECU team.”

Toti added that this event could not have been possible without its host, the Beaver Lake Ski Club and its members who worked hard earlier in the week to have the event area ready and pitched in that day as well, as well as providing the wood for the bonfire.

“Without their generous support, this event and our Tread The Mill Walk would not be successful,” stressed Toti. “Because of the donations from our sponsors and those taking the plunge, our athletes are able to travel and compete at competitions in Smithfield, Durham, Raleigh and Fayetteville.

“Special thanks and recognition goes to the Gates County Rescue Squad for their presence at the event. Without their willingness to be a part of the safety net for our plungers, we could not have this event,” she added.

Toti noted that GCHS Best Buddies and Gates County Special Olympics are appreciative of all those who continue to fund these needed programs.

“Without the participation of our community’s schools, church congregations, civic organizations and citizens. this event would not be able to continue,” she said. “Because of the tremendous support from our schools and local businesses, the event has been able to continue successfully. This year’s event was well attended and many community members are talking about having some community team competitions and challenges for next year.”

Special recognition was given to Johnny Greene and the Gates County Maintenance staff for helping prepare for the event along with the hard work by the volunteers who helped put the event together, helped with set ups, cleanup, registration, team judging, chili, judging, the bonfire, concessions and much, much more.

Plans are already under way for the 9th annual Tread The Mill 2019 in October and Polar Plunge 2020 (last Saturday in January).

“We hope you will join us at the Millpond in the fall and Beaver Lake in January. It’s never too early to be thinking about Freezin’ for many wonderful reasons— our local Special Olympics athletes,” Toti concluded.