The lecture is titled, “Northeastern North Carolina in Red, Black and White: A History of African Americans, Native Americans, and Whites and their Interactions in the Region.”

“This is coming home,” Smallwood said. “I grew-up on this campus. As a member of the Upward Bound Program, I 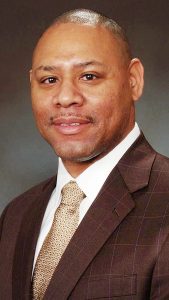 Bertie County native Dr. Arwin D. Smallwood is professor and chair of the Department of History and Political Science and Carter G. Woodson Distinguished Lecturer for the Association for the Study of African American Life and History Science at North Carolina Agricultural and Technical State University.

was inspired to go to college by teachers and mentors like Dr. Frank Stephenson, the director of Chowan’s Upward Bound. He has been my friend and mentor for over 30 years.”

Born in Windsor and raised in Indian Woods, Smallwood earned his Bachelor of Arts degree in political science and his Master of Arts degree in history from North Carolina Central University. He completed his Ph.D. in early U.S. and African-American history at The Ohio State University. Smallwood is professor and chair of the Department of History and Political Science and Carter G. Woodson Distinguished Lecturer for the Association for the Study of African American Life and History Science at North Carolina Agricultural and Technical State University in Greensboro, NC. He is also a North Carolina Humanities Council Road Scholar.

Smallwood’s first teaching position was as Visiting Lecturer at North Carolina A&T State University, where he served for one year before becoming Director of African-American Studies at Bradley University in Peoria, Illinois. After seven years at Bradley, Smallwood was recruited to the University of Memphis where he helped build a PH.D. program in African-American History, the only one of its kind in the country. Smallwood taught in the Department of History for ten years.

Smallwood is the author of several books including, “The Atlas of African American History and Politics: From the Slave Trade to Modern Times” and “Bertie County: An Eastern North Carolina History.” Several of his articles have been published and he archived the Bart F. Smallwood Papers, housed in the Southern Historical Collection at the University of North Carolina at Chapel Hill.

Smallwood’s research focuses on the relationships between African-Americans, Native-Americans, and Europeans in Eastern North Carolina during the Colonial and early Antebellum period. He also maps African-American, Native-American, and Early-American history to illustrate early historical interactions between the three groups and to teach history to all levels including K-12. Smallwood served as a judge for North Carolina History Day, is a member of the National Humanities Alliance Working Group for Community Impact, and the newly formed North Carolina MSI Humanities Corridor.

Smallwood’s many fellowships and awards include, among others: A National Endowment for the Humanities Challenge Grant; The John D. Rockefeller Jr. Library Fellowship; the Colonial Williamsburg Foundation Fellowship; and the Gilder Lehrman Fellowship. Smallwood also participated in the award-winning UNC-TV film documentary titled, “The Birth of a Colony: North Carolina,” produced by UNC-TV, the North Carolina Department of Cultural Resources and Horizons Productions.

He serves on several boards, including the Board of Directors for the Charlotte Hawkins Brown Museum, the Advisory Board for the North Carolina Historical Markers Commission, and the education curriculum committee for the Historic Hope Foundation. He is a life member of the American Historical Association, the Southern Historical Association, and the Association for the Study of African- American Life and History. He is also a member of the Historical Society of North Carolina, Phi Alpha Theta, and Phi Kappa Phi honor society.

The lecture is named for Reverend and Mrs. Rouson who were noted Hertford County religious leaders. Their legacy of religious stewardship, family values, and community service lives on today in the lives of their children, former students, coworkers, and county residents.

“The purpose of this event is to recognize Christian values, brotherhood, stewardship, and the importance of family,” stated local historian Alice Eley Jones, “to recognize good Christians who do good deeds for their community.”

During the lecture, Dr. Speller of Edenton and Revelle of Murfreesboro will be honored with the Minnie Wood Perkins Humanitarian Award and Futrell/Ruffin Community Service Award, respectively. The Minnie Wood Perkins Humanitarian Award honors a woman who dedicated her life to the well-being of the community members and her family. The Futrell/Ruffin Community Service Award honors two established Murfreesboro families.