The game featured 17 lead-changes and 10 ties.

The win also set up a first place showdown last night (Friday) for first place in the 2A Northeastern Coastal Conference between the Lady Bears and Bertie. That game was not completed, however, by press-time.

Neither team scored in the first ten minutes of the game leaving it 0-0 after the first quarter and the first two minutes of the second before Hertford County’s Brianna Howard broke the stalemate with a three-pointer. However, Currituck outscored the Bears the rest of the way a dozen points-to-4 for a 12-7 halftime lead.

Hertford County played catch-up and squared the game at 15-all – the first of three third quarter ties – on a pair of Desiree Askew free throws. The lead see-sawed until Ashley Jenkins’ put back gave the Bears a 21-19 lead headed to the fourth. 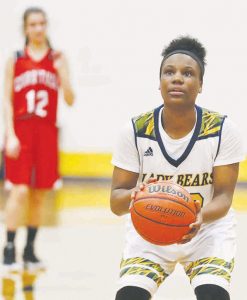 Hertford County’s Desiree Askew prepares to sink what proved to be the game-winning free throws as the Lady Bears knocked off conference rival Currituck County 41-40 on Tuesday night in double-overtime. | William Anthony Photography

Trailing 25-19, Currituck got a field goal and a triple to get within a point, 25-24. Then after Jenkins’ go-ahead basket, the Lady Knights struck again with a trey with 10 seconds left and sent the game to overtime at 27-27.

Hertford County went up by a pair, 32-30, midway through the first five minutes, but Currituck struck back for another tie. Askew made a baseline lay-up with 10 seconds left in what looked like the game-ender, but with one second left in the extra period, Trinity Evans tied it on a put back and it was time for more basketball.

Currituck scored first in the second OT, but Askew was not to be denied; she sandwiched two low post scores between a Howard free throw for a 39-36 Bears’ lead. Evans tried for more heroics and got the Knights back in front by a point on a late jump shot with 10 seconds left. However, with three seconds left, Askew was fouled underneath going for an offensive rebound. She calmly sank both foul shots and Currituck failed to get a play off before the horn ended the long extravaganza.