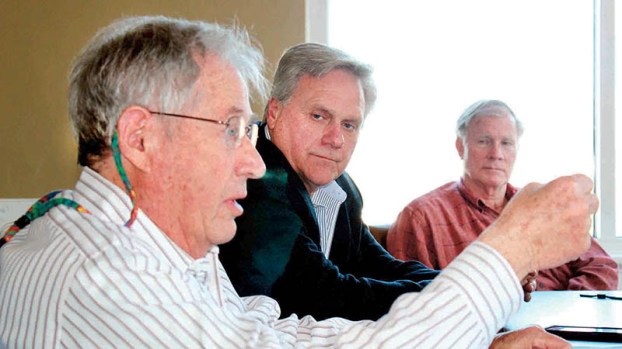 ECU Coastal Geologist Dr. Stan Riggs (left) is joined by (from left) Bertie County Commissioners chairman John Trent, and Lewiston farmer John Griffin in a discussion on downstream Roanoke River flooding and its effects on the county. Riggs recommended changes in US Army Corps of Engineers policy on releasing water from the Kerr Lake Dam. | Staff Photos by Gene Motley

Flood control or control the flooding

WINDSOR – It’s a complex system of lakes and other waterways spanning two states.

Add to this, Mother Nature; which this year along ramped up the rainfall, sending two hurricanes and some other significant rain events our way. In both September and October there was seven times the average amount of water for that time of year flowing into Kerr Lake.

The reason for the high water is obvious. Heavy rain and snow upstream and in the area have inundated the Roanoke River, causing it to overflow its banks – not only at Lake Gaston but everywhere downstream where water is overrunning farmland while local riverside docks and boat landings are underwater. Flood warnings downstream have been issued.

At 320-321 feet – the brim for Kerr Lake Dam – the US Army Corps of Engineers-Wilmington District (USACE), which owns and operates the dam, is required to release 85 percent of water still flowing into the lake. When water levels rise above 321 feet, the Corps must release 100 percent of the water flowing into the reservoir.

The Corps is responsible for flood control in the Roanoke River basin and in turn decides how much water flows out of Kerr Dam and on into the river further downstream. They go into Flood Operations when it decides it has to release a lot of water from the lake. That release amount is generally between 28,000-35,000 cubic feet per second (CPS). 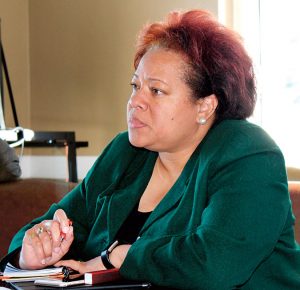 Because of all those weather events, the Corps has been in Flood Operations for much of the late fall on into the winter, and it’s this downstream flooding – particularly affecting Bertie County – that has local farmers concerned. They voiced their concerns in a meeting with State Senator Erica Smith in Windsor this past weekend.

“The weather patterns of the last three years (2015-17) have changed drastically,” declared Trent.

“They will say this is a year of record rainfall, and it is; but we’ve had rains in the periods of time much bigger,” said John Griffin, a Lewiston-Woodville farmer with cropland on Weeping Mary Road by the Roanoke where the release of high dam water has caused flooding. Griffin says he has some 1,400 acres of farmland that are adversely affected

“(Kerr Dam) was put in to control flooding on the lower Roanoke River, us,” he added. “And now we’re on the bottom of the pile to them.”

“They’re more worried about the environmental impact than they are with this water running across my fields that I’ve put lime and fertilizer down on for years,” Griffin said. “I’ve seen places underwater that I’ve not seen such since the early 80’s.”

Griffin says he has had to move his sage crop to higher ground that had not flooded for 15 years.

“And now it’s got water running through it,” he admitted. “It’s dead and gone, 10-15 acres; and that’s adding onto to my expenses with dollars that are not covered by crop insurance.”

“If I had to rely on crop insurance to be my goal for a yield, I’d starve to death and be out of business,” he noted.

Griffin also said high water had caused some 30-40 acres of his cotton crop to either be stunted or killed.

“They say they see our problem, but they also say they’re mandated to do it this way,” he acknowledged.

The Corps says they cannot release water through the dam based on what they anticipate the weather will be.

“Who says they can’t,” he wondered.

Griffin pointed out adverse effects on wildlife and recreation: fishing along the Roanoke River has been down since the beginning of the year, higher concentrations of river-bottom mud have affected boating, wild turkey nests are flooded out – there’s been no decent hatch, and the deer population has been diminished.

“It’s run the deer out, and the hunting business has been ruined,” he declared. “That’s millions of dollars of income in some form for Bertie County when you add it all up.”

“You can see this is affecting everyone in some way here in Bertie County,” said Pugh.

Trent and Cooper also shared some photo evidence of the risen river water’s impact, and Roxobel forester Don Johnson spoke about the effects on the local timber industry.

“Roanoke River bottomland is considered the largest remaining one east of the Mississippi. It’s great for growing hardwood timber, and that’s a tremendous asset,” Johnson said. “When you go in after the water has receded, the trees – including loblolly pines – are under stress, and that shuts the tree’s maturity metabolism down. It won’t kill them, but you lose a year’s growth and production.”

Johnson said it also affects competition of the species.

“When you go in on that bottomland after flooding, a lot of that seed on the ground has washed or gone away, and they can’t typically sprout, which kills the next regeneration of trees that are coming in,” he noted.

“Let’s get this thing back to a natural state,” warned Johnson. “If it’s got to go up, let it go up, but not for months at a time.”

Dr. Riggs said it takes six to seven days for the water to flow from the dam down river once it’s been released.

“The river pulses,” the professor said. “And in our climate with late summer tropical storms, it doesn’t matter if they come up from the Gulf Stream or rage along the Atlantic, every one of those storms’ funnel systems, about 75 percent, are predictable. The ‘super problem’ is so much water came in from both Florence (Atlantic storm) and Michael (Gulf hurricane). Add to that all these frontal systems we’ve had in the fall and winter with about two inches of rain per system and it’s a cumulative impact.”

Riggs said despite Bertie County not taking a direct hit from any of the 2018 storms, there’s an ebb and flow to the river water chart.

“During (tropical weather systems) Julia and Matthew, you had 18 feet of flooding,” Riggs said. “That’s when they (Corps) started letting the (Kerr Lake) water out, which was natural for the ecosystem.”

“It’s better when the rains come through Bertie County and not through the Kerr Lake watershed because when it comes through here it gets really wet, but within a week we’re back in business,” added Griffin. “Now, when it goes through there (Kerr), we’re out of business for three to four weeks.”

“Right now, everything’s so saturated that once it recedes to normal, you have an incredible amount of groundwater, and once it comes out, you’re going to have an erosion event,” cautioned Riggs.

EMS Director Cooper drove the area where the directional flow of the river has been altered.

“It just shows where (Mr. Griffin’s lots) are affected,” said Cooper. “It doesn’t even include Halifax and Northampton.”

Cooper said since Nov. 20, there has only been seven working days where sand and rock can be sold out of the Weeping Mary Road sand pit.

“They can’t mine any of it,” he noted. “They can’t get equipment in because they’re full of water, and they have to run pumping operations instead of mining. They can’t keep up with what the river is doing.”

Cooper also shared a tragedy from last summer when there was a drowning on the river near the boat landing.

“We couldn’t get our equipment back there,” he declared. “If we tried to get a county boat back there (for a rescue), it would probably float on the back of my trailer. It puts us in a dangerous situation because the river is 13-feet higher than normal.”

“We need to make changes,” said Dr. Riggs. “They (USACE) told us it’s a policy. Well, we can change policy. If the choices are just dump or don’t dump, it won’t work. They have to put what’s going on into a regional context. What’s got to change is the future here.”

Smith said a prior meeting with landowners in Northampton, Warren and Vance counties concerning flooded properties also involved the USACE.

“At that meeting with some 400 stakeholders, they (Corps) said they were interested in changing protocol, but were reluctant because of flooding onto lakefront property,” Smith stated.

Smith said changes to the release pattern needed to be discussed further.

“What your charts show is that they don’t need to wait until there’s an overflow (at Kerr Lake), but look at geological advancements and see when we need to start releasing to prevent the catastrophe of the constant flooding and the high water hanging around longer,” she noted.

Trent suggested monitoring the inflows to the lake to better calculate the outflows as a possible solution to what happens on the south end (Bertie County). Dr. Riggs said he concurred with Trent on that observation.

“They need to think for themselves, and not just go by what the manual says,” Trent noted.

The group has tentatively scheduled a follow-up meeting in February inviting farmers, foresters, state EMS coordinator Mike Sprayberry, along with the legislative representatives from Raleigh as well as Washington (Butterfield, Burr, and Tillis); and, in addition to Bertie County, Martin, Halifax, Washington, and Northampton counties could also participate.

“There’s no such thing as a 500-year flood,” joked Dr. Riggs. “Because we really don’t have the evidence that goes back that far.”

WINDSOR – What was supposed to be a private Facebook posting between a Bertie County Commissioner and another party erupted... read more