Dr. Leary was born in Ahoskie, NC, on October 9, 1931, a son of the late James Stanley and Edna Earl Sewell Leary. Thomas was a 1949 graduate of Ahoskie High School. He then attended the University of North Carolina at Chapel Hill where he graduated with a BA degree in Chemistry-PreDental. After graduation, he taught science and coached at Mars Hill High School at Trap for a year, before returning to UNC School of Dentistry and graduating with a Doctorate in Dentistry. Thomas returned to Ahoskie to begin his career and practiced for fifty years and nine months in Ahoskie. 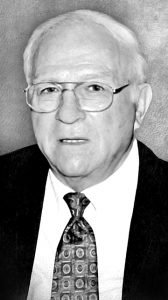 Besides his professional life, Thomas was also very active in the community and civic organizations. He had served as President of the Ahoskie Jaycees and the Ahoskie Lion’s Club and served on the board of the Gallery Theatre. He was a member of Woodmen Life Chapter 328 in Ahoskie, where he had served as President and Vice President, President of the Roanoke Chowan District Association of WOW, and served as delegate to the district and state meetings for several years.

Thomas was the first boy in Ahoskie to earn his Eagle Scout with Bronze Palm. He was holder of Green Band and Compass District Scout Award, and holder of the Silver Beaver Award from Eastern Carolina Council of BSA. He served as district chairman of Eastern Carolina Boy Scouts, and was on the executive board of East Carolina. Thomas was a century member of Boy Scouts of America and had received the Governor’s Volunteer Award. He also served as a Cub Scout Leader.

Dr. Leary was a faithful member of First Baptist Church of Ahoskie, where he had served as a Sunday school teacher, sang in the choir, and served on the nominating committee.

He was a true lover of the outdoors and camping. He enjoyed traveling and going camping with his camping chapter, the Roanoke Chowan Indians, for which he served as President for several years.

Besides his parents, Thomas was preceded in death by his brothers, James Stanley Leary, Jr., and Stephen Sewell Leary, and his sisters, Edna Earl Leary Newsome, and Fannie Marie Leary.

Thomas Leary touched many lives, both professionally and personally and will be greatly missed by all who knew him.

A celebration of life memorial service will be held on Saturday, January 26, 2019 at 11:00 am at the First Baptist Church of Ahoskie with the Rev. Dr. Trey Gilliam, officiating. A private burial will be in Ahoskie Cemetery.

In lieu of flowers, the family requests memorial contributions be made directly to First Baptist Church of Ahoskie, P.O. Box 649, Ahoskie, NC, 27910; or you may donate online by visiting www.tmcfunding.com/search; then type Thomas Leary.

Garrett-Sykes Funeral Service – Ahoskie Chapel is handling the arrangements for the Leary family and online condolences can be directed to the family by visiting www.garrettsykesfs.com.

MURFREESBORO, NC – Margaret Futrell DeLoatch quietly slipped away from her family and earthly home of 87 years to be... read more