Her memorial service will be held at 1 p.m. on Wednesday, January 16, 2019 at Garber United Methodist Church in New Bern, NC, with a reception to follow.

Sue grew up in Ahoskie, NC and graduated from St. Mary’s in Raleigh, the University of North Carolina at Chapel Hill, and 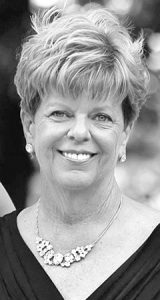 Katherine Gibbs School. Her career began as an administrative assistant to Congressman Walter B. Jones, Sr., in Washington, DC. As her family grew and moved from Richmond, to Charlottesville, and Blacksburg, Virginia, she committed her time and talent to public relations in local schools and city organizations. Sue recently returned to her beloved Tarheel state in a new life of opportunities to be with and serve others. Lovingly known as the one in charge, she excelled in the culinary arts and always extending true southern hospitality to each of her friends and guests. She was a courageous and devoted mother and grandmother.

Sue was preceded in death by her father and mother, Robert Allen Anderson and Helen Corbin Anderson.

In lieu of flowers, the family requests donations to the Salvation Army of New Bern at 1402 Rhem Ave., New Bern, NC 28560.

Online condolences may be made at www.mundenfuneralhome.net