The Eagles captured both junior varsity and varsity girls’ contests, while the boys put up a valiant fight before falling to the Colts.

Even though they don’t keep team statistics, Northeast’s Emalee Jones has to be leading junior varsity girls’ scorer at over 20 points per game. Tuesday she scored 21 in a 36-31 NEA victory. Sarah Kate Ricks chipped in with a dozen more (12), and Hannah Storey had 3. Northeast broke a 7-7 first quarter tie and defensively, never let the Lady Colts score in double figures for a single quarter before posting the five-point win. 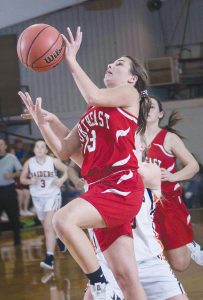 Northeast Academy’s Jessie Martin (#23) is fouled on a lay-up attempt in an earlier game. Martin had 15 points Tuesday to help lead the Lady Eagles to a 45-15 victory over The Albemarle School in TIC hoops action. | A.A. Imaging / Andre Alfred

Meanwhile, in one of their lowest offensive outputs of the season, the Northeast jayvee boys fell to the Little Colts 45-8. Albemarle led 25-3 after the first period and 35-3 at halftime. Trent Wheeler and Heath Hobbs had three points each while William Coggins scored two.

Northeast’s varsity girls poured in 30 first half points in addition to holding Albemarle off the scoreboard in the first quarter. It all added up to a 46-15 win for the Lady Eagles and kept the Lady Colts winless in league play. Jessie Martin had a 15 point breakout game on the road while Carly Stephenson had 10 points and Allie Liverman added eight. Six points were scored by Haven Jilcott, four for Kierstyn Polson and two for Rebecca McDermott. Brooke Perry had eight points for Albemarle. Despite the win, Northeast were still two games behind league-leaders Ridgecroft and Pungo.

Another slow start doomed the Northeast varsity boy’s squad as they came up on the short end of an 82-51 effort from the Colts. Trailing 40-19 at halftime, the Eagles re-grouped and cut into that lead in the third quarter, but not sufficiently enough as they fell by 31 points. Justin Jones scored 15 and was joined in double-figure scoring by Ryan Rowe with 10. Michael Smith and Dylan Edwards had eight points apiece while J.T. Simmons added seven. Noah Lassiter scored two points and Brandyn Polson, one.

Northeast’s next two games were at home: a 54-47 varsity boys win over Lawrence Academy last Friday, while the Northeast girls fell to the Lady Warriors 57-47. Their last game was versus Hobgood late on Tuesday and neither had ended by press time.