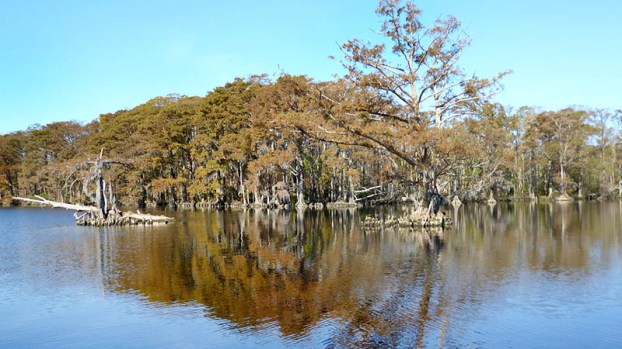 Salmon Creek in Bertie County borders the southern edge of a 1,000 acre tract of land that has been turned over to the North Carolina Division of Parks and Recreation by the North Carolina Coastal Land Trust for use as a nature area. | Contributed Photos

Nearly 1,000 acres of swamp and farmland that borders Salmon Creek at the mouth of the Chowan River in Bertie County has been transferred from the North Carolina Coastal Land Trust to the state’s Division of Parks and Recreation.

The section, which will now be known as the Salmon Creek State Natural Area, borders the creek for 3.5 miles and includes 400 acres of mature cypress-gum swamp and bottomland hardwood. The rest of the property is farmed for trees and crops. It is also home to ‘Site-X’, an area where archaeological digging has occurred over the past three years with clues that may reveal the fate of the famed Lost Colony.

The property had originally been approved for development for up to 2,800 home sites and a 212-slip marina, according to Land Trust Executive Director Camilla Herlevich. However, the recession of 2007 quashed those plans, causing the owners to put the property back on the market for sale in early 2017.

“It was listed for a price for immediate sale but at a price below what we had planned to offer,” Herlevich said. “It became pretty clear to us that time is money.”

So the land trust borrowed money – something it seldom does – to buy the property, then sought grants from several sources, including the Clean Water Management Trust Fund, U.S. Fish and Wildlife Service, North Carolina Attorney General’s 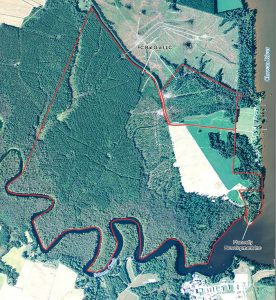 Shown outlined in red is the property that will be used as a nature area in southeastern Bertie County.

“The Salmon Creek property stands out due to its rich cultural history, truly pristine ecosystems and unique archaeological resources,” Susi Hamilton, secretary of the N.C. Department of Natural and Cultural Resources, said in a statement. “We are grateful for the tireless work of the N.C. Coastal Land Trust and all of the partners in funding this project. We look forward to offering this new state natural area in Bertie County, a beautiful part of our state currently underserved by our state parks system.”

The Salmon Creek State Natural Area will also border the 137 acres on the Albemarle Sound purchased by Bertie County, and additional 10-plus acres which will provide easement and access.

“The Board’s decision to acquire the adjoining 10.35 acre tract on the Albemarle Sound is critically important for eliminating the restrictive easement requirements, and is a necessary step in order to capitalize on the county’s investment,” noted Bertie County Commissioners chairman John Trent. “With each step, the Board is changing the future for Bertie County and creating new opportunities for our children and families in the years to come.”

“We had no idea this was about to happen,” Trent continued. “Now it’s all combined towards us.”

Near the shore of the Sound is an area where archaeologists have found evidence of a Native American village as well as a European settlement from as early as the late 1500s.

The latest findings include ceramics from the period as well as a lead seal made in Germany in the late 1500s, an item that people wouldn’t likely keep for long.

“It’s like the tag on your clothes; you throw it away,” said Phillip Evans of the First Colony Foundation. “It shows they are there, they’re active, and they’re using fabrics they brought with them.”

As historians note, the colony was the fruit of an attempt to establish an English settlement on Roanoke Island starting in 1585. However, after a trip back to England, when John White, the leader of the second of two expeditions to the island, returned, the settlers were gone.

In 2012, a closer look at a map White drew in the 1580’s contained a patch covering a symbol near the mouth of Salmon Creek that suggests a fort or other settlement. The First Colony Foundation has focused its efforts on this area, known as ‘Site X.’

The Salmon Creek property also likely contains artifacts from the home of Thomas Pollack, a colonial governor in the early 1700s who named his plantation Balgra after his ancestral home in Scotland. The residential development once planned for this land would have been called Bal Gra Harbor. Archeologists who have conducted digs on the site called the preservation of the property by the land trust “a remarkable achievement.”

The archaeological sites, as well as the swamp forests along the creek, are the main reasons the state is making it a natural area and not a park, which would receive far more visitors, said Katie Hall, spokeswoman for the N.C. Division of Parks and Recreation. Hall said there will likely be some types of “low-impact” public use of the property, such as kayaking and canoeing, in the future.

“We’re just getting the property into our system,” she said. “We’ll start thinking about how it will be protected in the long-term and what that will mean for public access.”

“This is a great opportunity,” said Trent. “Especially when we said we were going to put a park in. This means 1,300 acres that can be utilized by the citizens of Bertie County. Not only is it a great opportunity now, but in the future it’s an even greater opportunity.”

One size does not fit all

WINTON – In a “one size fits all” scenario, there are cases where that doesn’t apply. Such is the case... read more