FRANKLIN, VA – One of the two suspects sought in a Bertie County murder on Jan. 6 has been captured in Virginia. 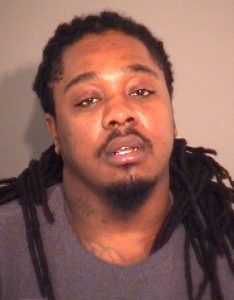 According to a press release from the Franklin (VA) Police Department, officers located and apprehended 28-year-old Tywan Jonshea’ Outlaw, aka Too-da-loo, of Colerain this morning (Thursday).

Outlaw was wanted for accessory after the fact to murder. Arrests warrants were issued Wednesday by the Bertie County Sheriff’s Office for Outlaw as well as for 29-year-old Jashawn De’Andre Brown (aka ‘Southside’). Brown, who is wanted for murder, remains at large.

Both men are alleged to have been involved in the Jan. 6 murder of Rayshon Carter. That homicide occurred at an adult birthday party held at the Merry Hill/Midway Community Building, located off NC 45 near the US 17 intersection. There, a fight reportedly preceded a blast of gunfire. Carter was struck by multiple bullets. He was airlifted to Vidant Medical Center in Greenville where he later died.

Franklin Police Captain T. W. Whitt said in the press release that his department, acting on a tip from the Bertie Sheriff’s Office, responded to an apartment in the 300 Block of North College Drive at around 7 a.m. today. There, Franklin Police officers located and apprehended Outlaw.

Franklin officials obtained a fugitive warrant on Outlaw and he is being held for accessory after the fact to felony murder. He will be remanded to Western Tidewater Regional Jail pending extradition proceedings back to Bertie County.

Franklin Police and Bertie County Sheriff’s officials are working together on this case.

WINDSOR – Two suspects have been identified in a shooting that claimed a life in Bertie County this past Sunday.... read more