The Chowan University men’s basketball team avenged their only loss of the season here Sunday at the Helms Center as the Hawks held off West Virginia State 83-76 in non-conference action.

It was Chowan’s 10th win of the season; their highest win total through their first 11 games in the NCAA Division II era.

“Our rebounding was huge,” said head coach Brett Vincent, whose team won the battle of the backboards 47-to-36. “We also did a good job defending and that made them change a lot of their shots.”

Chowan (10-1, 3-0, CIAA) was led by Gus Rowland with 21 points, eight rebounds, seven assists and a pair of three-pointers, but none bigger than the one with 1:01 left in the game that gave the Hawks a five-point lead at the time and helped seal the win. Rowland also played the entire 40 minutes of the contest. 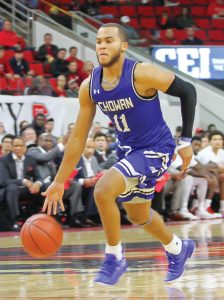 Chowan’s Gus Rowland scored 21 points, including a clutch three-pointer down the stretch, as the Hawks avenged their only loss of the season with an 83-76 home win over West Virginia State University on Sunday in Murfreesboro. | Next Level Photos / Charles Revelle

“I just felt it,” he said, sipping water to stay hydrated after the game. “When that shot went in the bench cheered and I just turned to them nodded and said ‘that’s game’.”

Demetrius Sanders scored 19 points with seven rebounds and three blocks while Michael Kelly registered a double-double with 16 points and 12 rebounds.  Deon Joyner and Timothy Bing chipped in with 13 and 10 points respectively as Chowan shot 50 percent from the floor in the second half

Both teams jockeyed for the lead in the early going as WVSU would hold a slight advantage early before Rowland handed the lead back to the Hawks, 12-11, with a pair of free throws.

WVSU would stretch their lead to 26-18, but the Hawks would not be turned away. Chowan went on a 9-2 run to pull within one, 28-27, with less than five minutes to play in the opening half.  After a pair of free throws by the Yellow Jackets, Rowland knocked down his first triple to even the score at 30-all.

Each team traded free throws down the stretch before WVSU settled in to lead 40-38 at intermission.

Bing started the scoring for the Hawks in the second half with a triple to even the contest at 41.  WVSU went on a small run but back-to-back Sanders triples gave the Hawks a one point advantage, 48-47.

The two teams traded the lead as the half featured five lead changes and four ties. A layup by Kelly along with a dunk and a jumper by Sanders gave the Hawks a four point lead, 72-68, with 3:44 to play.

WVSU closed the gap to one, 74-73, on a triple, but Kelly converted down low and then Rowland knocked down his three-pointer to lead 79-73. After a Yellow Jackets turnover, Joyner took a lob over the defenders on the inbounds play for a dunk, while Sanders finished off the contest with a pair from the stripe.

“We missed some shots early, but I thought we played much better defense in the second half,” Vincent added. “Wins hold a team together and this was a huge win we earned.”