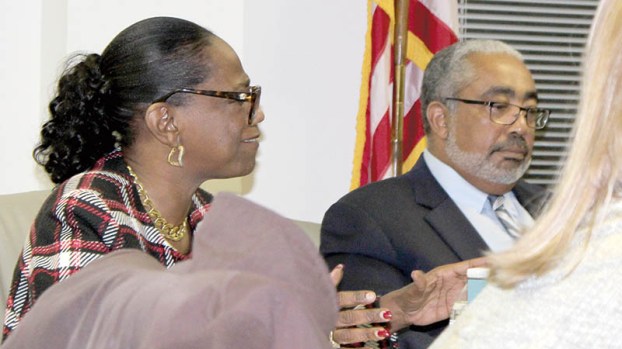 WINDSOR – What was supposed to be a private Facebook posting between a Bertie County Commissioner and another party erupted into a contentious exchange here during the Commissioner’s monthly meeting here Monday night.

The disagreement actually began at the Nov. 13 Commissioner’s meeting where, during public comments, two citizens made remarks. One person, Hope Community Center of Lewiston’s Ishmael Muldrow directed his remarks specifically at re-elected District III Commissioner Tammy Lee, at one point calling for Lee’s resignation. The comments, pointed and personal, exceeded the generally-required time limit of three minutes, actually going beyond six minutes, before conclusion and the resumption of the regular agenda.

That exchange is also purported to have played a part in the Dec. 6 meeting’s election of Board officers for the 2018-19 term in which now-former Board chair Ernestine Bazemore had sought a second term. Her name was placed in nomination by fellow Commissioner Ron Wesson, while newly-elected 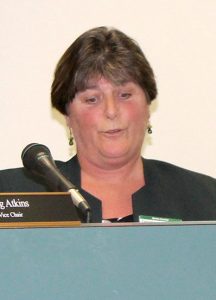 Commissioner Tammy Lee responds to Wesson’s claims of a conspiracy to end Bazemore’s lead position on the board.

Later, and seemingly unrelated, Atkins was unanimously voted as vice-chairman after the other nominee, Wesson, declined the nomination.

Later, during Commissioner’s comments, Wesson opened his remarks by saying that after serving as a Commissioner the last six years, this election of Board officers was the most disappointing and troublesome that he had witnessed. Bazemore, rejected during her vote, also expressed displeasure in the Board’s decisions for chairman and vice-chairman.

But with Monday’s goings-on, it was obvious the matter did not end there.

Before a vote could be taken Monday to approve the Dec. 6 minutes, Wesson revealed that a public statement had come to his attention.

“It’s caused me to have some questions about this statement, and what this statement really means to our election process and to this county,” he said.

Wesson then held aloft a copy of a statement of a Facebook Messenger posting saying it was authored by Lee and written sometime around early December.

The Roanoke-Chowan News-Herald received an electronic copy of the statement, which read:

We were ready to give her another year until last month’s meeting. She should have gaveled Ishmael when he started attacking me, but she let it continue. We have a policy for public comments, and it clearly was not followed. There was nothing Racial about it. Those that know me well know that I love everyone.”

The references made to “her” and “she” apparently identify Bazemore.

“One of our citizens asked what had happened at our meeting,” Lee related. “Instead of going on Facebook and putting it out there, I private messaged her on Messenger.”

“So the statement is true,” asked Wesson.

Lee owned up to sending the statement, to which Wesson continued by asking to whom the ‘we’ in the statement referred.

“Two of the Commissioners – and one Commissioner-elect – were talking one-on-one,” she replied. “We never broke any laws. We never got together, it’s just something that’s happened every year since I have been elected; we talked about who was going to be chair, every year.”

Wesson retorted that he had heard Lee and other Commissioners outside the public body agree to support Bazemore.

“But because of what a citizen stated, in this meeting, you decided not to do that,” he queried.

“This was not based on her (Bazemore), it was based on what the gentleman said,” Lee stated.

Wesson then asked the other individual Commissioners if they had been party to what was implied in the statement; if they had intentionally and collectively opted not to support Bazemore for a second term as chairman because of the citizen’s remarks at the November meeting.

“There was discussion,” said the newly seated Atkins. “I don’t know that there was ever any total agreement.”

“There was some discussion in reference to it; yes,” answered Trent.

Lee then interjected that Wesson had made a similar inquiry of her in which he indicated he intended to support Bazemore for a second year.

“But did I ask you to do anything,” Wesson inquired.

“No, and I’ve not asked them and they didn’t ask me,” she answered.

“So they just agreed without you asking,” he retorted. “How do you get agreement when nobody asked?”

Wesson turned to the assembly and said the problem was the machinations and goings-on behind the scenes.

“I don’t know of a single Commissioner who has only talked to a few of us about who they would or would not support for this board,” he declared. “To me it sounds like you’re conspiring.”

“You called me and asked about her being a chair for the second time,” Lee allowed. “That is no different.”

Wesson shook his head and gestured with a copy of the statement.

“That is not true,” he replied. “Here’s the statement in black-and-white which shows what you did, and you put this out there in the public as a public statement.”

Lee again denied it was for public perusal.

“As a Commissioner, any statement you put in writing in a public meeting is a public record,” Wesson emphatically stated. “That’s what this is, and it shows what you were trying to do and what you were successful in doing.

“This is not the way we should be governing in this county,” he concluded. “It’s just not the way.”

Upon Wesson’s final statement, Chairman Trent moved on to approve the Dec. 3 regular minutes and proceed with the order of business.

WINDSOR – An Aulander man has been arrested after Bertie County Sheriff’s deputies and members of the Down East Drug... read more