In the girl’s contest, despite an early first quarter lead, the Lady Eagles fought back from a 19-15 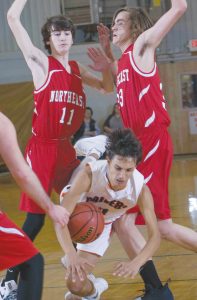 halftime deficit to post a 37-32 win, evening their record in Tarheel Independent Conference play at 2-2. It was also NEA’s second consecutive win and first of the New Year. 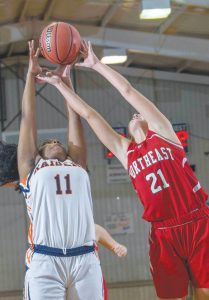 Carly Stephenson led the way for NEA (3-9) with a dozen points while Jessie Martin added 10 more. Allie Liveman had seven, while Haven Jilcott added five, with two for Summer Warmack and one by Kierstyn Polson.

Hobgood (2-9, 1-3, TIC) was led by Ja’Niya Matthewson and Morgan Waters, who contributed seven points each.

In the boy’s contest, Hobgood turned up their defense in the fourth quarter, limiting Northeast to just a five-point effort in the frame, and cruised to a 60-44 win keeping the Raiders unbeaten in conference play at 4-0. Maurice Batts led all scorers in the game with 18 points for Hobgood.

The Eagles trailed by six at the mid-break, 28-22, and were able to pull within a pair, 41-39, at the end of the third quarter. But Hobgood outscored the visitors 19-5 in the final quarter to take the game.

Northeast played at Terra Ceia in Pantego last night (Friday), then continue the road trip in Elizabeth City on Tuesday with a date (Jan. 8) against The Albemarle School. The Eagles’ next home game is Jan. 11 against Lawrence Academy.

AHOSKIE – Boom! If it’s one thing Washington County High School basketball teams are known for its explosions. After the... read more