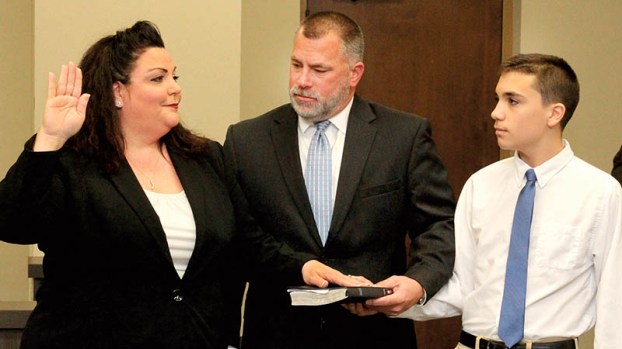 With her husband, Jimmy, and son, Ethan, proudly looking on, Valerie Asbell accepts the oath of office for a sixth time as the local District Attorney. The latest swearing in ceremony took place on Wednesday, Jan. 2 at the Halifax County Courthouse. | Staff photo by Cal Bryant

HALIFAX – While much has changed locally and across the nation since 2000, one thing remains the same – Valerie Asbell continues to aggressively prosecute criminals while at the same time has a heart as big as the ocean when it comes to passionately serving the citizens of Prosecutorial District 7.

On Wednesday morning in the Halifax County Courtroom, Asbell raised her right hand and took an oath to continue what is now a near 20-year journey as the local elected District Attorney.

At Asbell’s side on Wednesday were her husband, Ahoskie Police Major Jimmy Asbell, and their son, Ethan. They collectively held the Bible on which the veteran DA took her oath.

Meanwhile, the first few rows of the courtroom’s gallery were filled with Asbell’s judicial and law enforcement friends and colleagues.

“It is an honor and a privilege to be re-elected as the District Attorney for Prosecutorial District 7 which serves Bertie, Halifax, Hertford and Northampton counties,” said Asbell afterwards. “Today marks the sixth time that I have been sworn in as the District Attorney. I am especially grateful that my Senior Resident Superior Court Judge Alma Hinton performed the swearing in ceremony for me and my Assistant District Attorneys (ADAs).

“First of all, I want to thank God who has blessed my life with opportunities beyond measure, “Asbell continued. “I want to thank my family who were so patient and supportive during this election and for the past 18 and a half years as I have served as the District Attorney. While I am the person who was elected, the success of our office really belongs to the many dedicated, skilled and fearless professionals of my staff with whom I work on a daily basis.”

Asbell added that she was thankful and appreciative of the confidence of the voters in all four counties.

“Having four very big counties is not an easy task and the last four years have been hard but very rewarding,” the District Attorney noted. “Our office was able to reduce the backlog of homicide cases that were pending in Halifax County when I took office in 2014 while also continuing to handle the heavy caseloads in all four counties.

“Although I have served Bertie, Hertford and Northampton counties longer than Halifax, Halifax has become a second home to me. I look forward to continuing to serve all four counties with the same passion and enthusiasm. My priority is and will continue to be to serve victims of crime,” Asbell concluded.

A native of Roxboro, Asbell graduated in 1985 from Person Senior High School where she was a member of the National Honor Society. She enrolled at Emory University in Atlanta, GA where she was a double major in psychology and religion, graduating in 1989 with two degrees.

She was accepted to Tulane Law School in New Orleans. There she concentrated heavily on criminal law and worked as an intern in the New Orleans District Attorney’s office.

Upon graduation from Tulane in 1992, Asbell returned to North Carolina in an effort to be closer to her aging parents. She rented an apartment in Raleigh and then passed the North Carolina Bar Exam in August of that year, which led her to begin applying for jobs. She was informed about a possible job opening in the Murfreesboro office of David Beard, who at that time was the District Attorney for Prosecutorial District 6B (Bertie, Hertford and Northampton counties).

She interviewed for the job as an Assistant DA and was hired two days later.

In May of 2000, Beard retired in the middle of his elected term. Filling that vacancy required an appointment from the Governor, which then NC Gov. Jim Hunt granted to Asbell. Ironically, she received Hunt’s letter of appointment on May 29, 2000 – Asbell’s birthday.

Two years later (2002), Asbell was elected by a vote of her constituents for the first time. She has now followed that performance with four additional, four-year terms….the latest coming with another victorious election in November of last year, thus continuing her long tenure of dedicated service.

“Everyone may not always agree with my decisions, but I can tell you that I wouldn’t be doing my job if everyone did,” Asbell observed during an interview with this newspaper back in 2013. “I know I am an aggressive prosecutor and I hold people accountable for their actions and I will not make any excuses for that, but I treat people fairly and with respect and dignity. I understand and am keenly aware of how my decisions affect people’s lives and their liberty – both the victims and the defendants – and I do not take that responsibility lightly.”

By LANCE MARTIN rrspin.com REX, NC – The skull of a man whose body was found in Enfield in October... read more