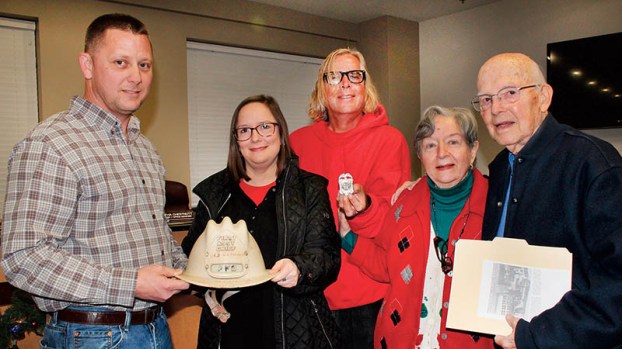 “A Letter to My Dad, the Firefighter”

AHOSKIE – They’re a faithful lot, when they get a call, they go.

And that’s what Theo Mitchell did for 38 years with the Ahoskie Fire Department; fighting fires at local businesses, homes, even farms adjacent to the town limits.

After retiring from the department, he spent another eight years working as a dispatcher for the Ahoskie Police Department, giving him a total of 46 years of service to the town.

And he also scored the very first touchdown for Ahoskie High School back in 1927.

On Dec. 3, Mitchell’s son Tommy, a retired coach and teacher at both Ahoskie and Hertford County High Schools, along with other members of the Mitchell family, presented Theo Mitchell’s original fire helmet and badge to Chief Mike Bradley and other current firefighters at the Ahoskie Fire Department headquarters.

Theo Mitchell had been interested in being a fireman all his life, getting his start with the department when it was a bucket brigade.

“They would get to a well, or another water source, fill up a bucket and pass it along up to the flames, as fast as they could move water,” son Tommy Mitchell recalls his dad stating.

The elder Mitchell, who passed away in 1983 at age 75, was assistant fire chief and interim chief for a brief period. He was one of the charter members of the department when it was formed back in the early 1920’s, even helping raise money to purchase the first brand new fire truck in 1923.

“It didn’t have a windshield on it because it would have cost too much,” Tommy Mitchell said. “And the first hose was small, much like a garden hose today.”

These early heroes had no oxygen masks or other gear of the modern firefighters of today; they only had raincoats and boots.

“I remember as a boy, Daddy would have his boots right there by the bed, like you see in the movies, so that when he got a call, all he had to do was jump into them,” Tommy recalls.

The Mitchell’s resided on Church Street near the railroad tracks, right around the corner from the old Ahoskie Fire Station on Main and McGlohon.

Theo Mitchell also helped oversee the hiring of the town’s first black firefighter, Billy “Snowball” Lewis. These early firemen were volunteers and were paid only so much for fighting each fire.

Mitchell’s full-time job was as a butcher at the old M System grocery across from No-Man’s Land, a forerunner to today’s self-service supermarkets.

“Daddy told me about many a fire,” said the son. “One he fought was at the old horse stables, where they also kept feed; and that one burned all the way to the ground.”

Another fire, Mitchell says, was at the old Garrett Furniture store that started in the basement. The firemen had to breathe in heavy smoke and gas fighting this one, and it took days for their lungs to clear.

Tommy Mitchell loved his father and the volunteer work he did, but decided not to follow in his footsteps.

“It was when he was fighting a fire at Jones Lumber Company (off Catherine Creek Road), and I rode with him on the fire truck. He let me pull the siren, and I got a chance to wave to all my friends as we rolled to the blaze,” said Tommy. “But after I got out of East Carolina (University), I joined the National Guard, went off to Ft. Jackson (S.C.), and when I got out and came home I got a job teaching and coaching in Colerain.”

Tommy says his dad taught him that firemen have always been faithful men. Whether they had to go in bathrobes with no shoes in the dead of winter, they would come. It was a duty, and they loved to fight fires.

After retiring from the department in 1965, Theo went to work as a police dispatcher.

“He would take calls and all when they would come in,” Tommy recollects. “He still wanted to be a part of it; it was just in his blood.”

“Some of the older firemen who’d also retired would also come around, and they’d sit around and tell stories. There’s so much history to tell,” Tommy says.

The original fire helmet contains some of the names of those early Ahoskie firefighters. Tommy recalls his father took great pride and held in high regard those men who put their lives on the line.

Following the Dec. 4 presentation, Ahoskie Town Councilman – and former Ahoskie Volunteer Fireman Matt Bradley showed the Mitchell family the plaque where Theo Mitchell’s name is proudly displayed among the brave men who have served as chief.

On Dec. 8, Tommy Mitchell got another thrill: he was aboard the fire engine for the Ahoskie Christmas parade; the same one that brings Santa and Mrs. Claus.

And once again, he got a chance to ring the fire bell.

‘Home’ for the holidays