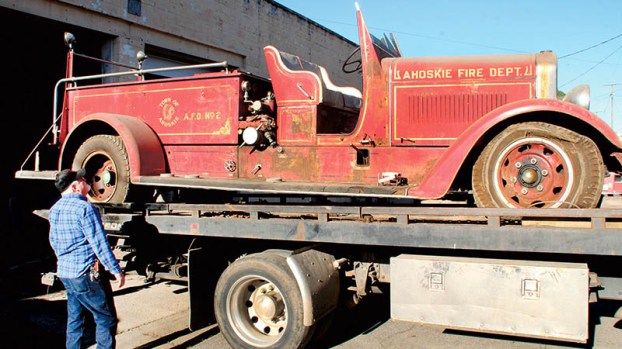 Barry Blowe, a retired Ahoskie Fire Department member, checks out this 1936 American LaFrance truck that once served the department. The truck was recently donated to the town by Winton native Walter Futrell, who purchased the firefighting relic in 1998 and stored it in an Ahoskie warehouse over the past 20 years. | Staff Photo by Cal Bryant

AHOSKIE – For past 30 years, an antique decorative radiator cap sat collecting dust inside the old (and now the new) Ahoskie Fire Department.

No one, not even those now retired after years of service to the department, had a clue of what vehicle that radiator cap once adorned.

That mystery was solved on Dec. 17.

Recently, the Ahoskie Fire Department was given, free-of-charge, a piece of their past history….a 1936 American LaFrance fire truck. That vehicle, purchased in 1998 by Walter Futrell, formerly of Winton and now residing in New Mexico, has been sitting in storage for the past 20 years inside a warehouse on Railroad Street in Ahoskie.

“It was my understanding that Mr. Futrell purchased our old ‘36 LaFrance along with another old Ahoskie fire truck, a 1963 model, for the purpose of restoring both,” said current day Ahoskie firefighter Matt Bradley, who also serves on the Town Council.

“I guess after he retired he decided that restoring the two trucks was too much like work, so they’ve both been sitting inside this warehouse since 1998,” Bradley added.

“We appreciate Mr. Futrell’s thoughtfulness to donate this truck back to the town,” Bradley noted. “He’s even going to send us the old siren and the old red light that he took off the truck once he purchased it. There are several other smaller items that we once part of this truck that he’s sending us as well.”

Low and behold, the antique radiator cap – which Bradley described as engraved with a Maltese Cross with a flange in the rear – is a percent fit to the one missing on the ‘36 LaFrance.

“Nobody who ever saw that old cap lying around the fire station mentioned that it belonged to the old ‘36 truck,” Bradley remarked. “One day, myself and George Michael (Bradley; Ahoskie’s current day Fire Chief) saw an old photograph of the ‘36 LaFrance. That same radiator cap was on it when that photo was taken. Now we have reunited that radiator cap and the truck it belongs on. It’s a beautiful hood ornament.”

Having these unique pieces of past history makes Bradley smile. He is currently spearheading an effort to collect Ahoskie Fire Department memorabilia from yesteryear to put on display.

“We’ve been working on this project for over one year; this is a pretty big deal to me and all our firefighters, past and present, here in Ahoskie,” Bradley noted. “Between getting this old fire truck and the fire helmet of the now late Theo Mitchell (a former AFD Chief), we’re finally getting somewhere with this project.”

“I remember back when I was eight to nine years-old going with my daddy, when he was a member of the fire department, to the old (Ahoskie) rural fire station, located then on Catherine Street,” he recalled. “I would beg him to let me see that old ‘36 LaFrance. Now I can see it whenever I want and we want our citizens and guests to our town to also enjoy this piece of history.”

The 1936 American LaFrance was the second motorized fire vehicle purchased by the Town of Ahoskie. The first was a 1927 Model A Ford that the fire department had restored 30 years ago. It sits inside the front lobby of Station One (Ahoskie’s new fire department located on Dr. Martin Luther King Jr. Drive). It’s used during parades.

Bradley said he and his AFD colleagues are currently looking for someone to fully restore the 1936 LaFrance.

“We’ve learned that the Raleigh Fire Department had their ‘36 LaFrance restored about two years ago and have it on display in a museum,” Bradley said. “I want us to take a trip there in January to see if we can get some information from the Raleigh guys on who they used to restore theirs.”

The original motor remains in the ‘36 LaFrance. The only part known missing is the carburetor.

“That was missing when Mr. Futrell purchased it back in 1998,” Bradley said. “Where it went is anybody’s guess.”

The Ahoskie Fire Department was first organized on Nov. 19, 1920.

Bradley encourages anyone wishing to donate memorabilia from the Ahoskie Fire Department to call him at 252-642-2811.

AHOSKIE – Organizers are currently in the planning stages to bring back a favorite event with a renewed purpose and... read more