Author Sylvia Walton (center) holds a copy of her novel ‘One Voice’ and appears with several Aulander Elementary School students at a book signing held at the Sallie Jenkins Library in Aulander earlier this month. The book addresses school bullying from both the bully and the victim perspectives. | Staff photos by Gene Motley

AULANDER – Imagine you’re a 13-year old about to enter middle school/junior high right on the periphery of embarking on some of the best years of your school life. But instead you’re teased, some of those you thought were friends are talking behind your back, some ‘mean kids’ are threatening you.

Gradually, you start to hate school; and the most pressing question is: What would you do?

Educator-counselor turned author Sylvia Walton addresses this question in her new book, “One Voice”, published this past summer and available for sale online.

Walton, who divides her time between Colerain and Aulander Elementary Schools in Bertie County, recently held a book signing at the Sallie Jenkins Memorial Library in Aulander where she and two of her students from Aulander Elementary STEM School presented a short skit based on characters in her book.

After the dramatization, the girls gave their own personal testimony of when they were bullied, how they reacted, and what they feel adults can do to help decrease bullying. The girls also sang a song in tribute to those students who are survivors of bullying.

Walton is a poet, inspirational blogger for women, and a playwright; she also has a background that includes mental health case manager, school social worker, as well as school counselor. 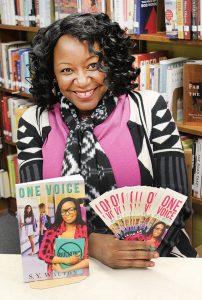 Walton, who is also a counselor with Bertie County Schools, holds copies of the book along with bookmarks. ‘One Voice’ is available for purchase online through Taylor Made Publishing in Greenville.

“What I have in the book are two students, Simone and Brooklyn, 8th graders of (fictitious) Hammond Middle School, as they face the trials of bullying,” Walton said. “The novel will give the reader the point of view of not only the student being bullied; it will also provide a unique perspective of what may have caused the bully to resort to hurting others through words and actions.”

Among the questions to ponder: Does Simone stand up to the bully? Were there people that took a stand to help her? Were there students who watched Simone being tortured by the bully? Walton says this novel will leave students realizing that taking a stand against bullying can be life-changing for a student being bullied.

“I want students to understand the importance of their voice, and begin to freely speak out against this issue because it’s not only happening here; it’s all across the nation.”

Walton also recounted a real-life incident in which a student broke their silence and spoke out.

Walton says some of the behavioral signs parents and teachers can spot are anger and isolation.

“None of us are born that way,” she reasoned. “It’s the circumstances of life that make children that way.”

Walton says despite modern maturity, today’s children don’t have the ‘coping skills’. She feels the world gives them too much to digest too soon.

“A lot of these are actually adult situations, and children aren’t ready yet to handle that,” she said.

Walton says one fallacy too often overlooked is the idea of bringing someone who has been bullied and their tormentor together to work things out.

“Bullying is about an imbalance of power, whether it’s physical power or social power,” she acknowledged. “Bringing the two together empowers the bully, while it can traumatize the victim. We want a quick fix, but everything with children is not a quick fix.”

Walton says she would like to see more involvement within the schools and she feels it needs to be addressed year-round.

“We have to teach children how to interact socially, because they don’t know how,” she said. “Not all of them, but when some children say things like, ‘You’re ugly’, or ‘You can’t read’, they can go through life thinking behavior like that is okay, and we as adults know it’s not okay to hurt others.”

Walton doesn’t put the entire onus on educators; she believes the community has to play a role as well; perhaps with a rally, or something that makes it fun for the kids.

Bertie County Schools basically defines bullying as persistent behavior that targets someone based on a protected class, such as disability, race or gender, and places a student or school employee in actual and reasonable fear of harm to his or her person, or damage to his or her property; or to create a hostile environment by substantially interfering with or impairing a student’s educational performance, opportunities or benefits.

“A lot of kids suffer in silence because they believe if they tell someone, it will only make the situation that much worse,” Walton said.

The author noted that Bertie County Schools have not had a situation where bullying led to suicide, or acts of violence carried out within the school grounds.

“When you’re torn down, or you feel you’re beaten down, these are the times when depression and anxiety come into children’s lives,” she said. “Because they don’t possess the coping skills, it can add to their unpredictability.”

Walton says ‘One Voice’ also looks at situations from the bully’s perspective, not just the victim. She also cites statistics that indicate one-in-five children are bullying victims.

“And what about the children that are not reported,” she questioned. “There are really so many who aren’t.

AHOSKIE – Organizers are currently in the planning stages to bring back a favorite event with a renewed purpose and... read more