Akyia King – who finished with 21 points and was named as tournament Most-Valuable-Player – led the attack for the Lady Falcons. Bertie’s smothering full court pressure defense didn’t allow a single Lady Aces player to score in double-figures.

King opened the game with Bertie’s first score, and after a tying basket by Jhasiyana Gilliam – her only points of the game – made it 2-2, the rest of the game was all Bertie. 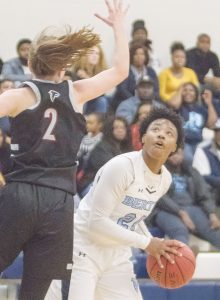 The Falcons went on a 14-0 run, eight of those points by King, giving her half her night’s scoring total in just the first quarter. It was 16-2, Bertie, after the first eight minutes.

The Falcon onslaught continued with six more to open quarter-number two. Four of those came on steals and layups by Jessica Stokes. Edenton’s Kaci Drew broke the Bertie string with a three-pointer, helping the Aces collect themselves. Though outscored 9-to-5, Edenton Holmes made a better accounting of themselves but still trailed 31-10 at the halfway point.

Edenton started the second half on a 7-to-4 run as Bertie slowed the pace of the game considerably. The Falcons only had six points for the quarter, but settled for a 20-point lead at the end of the third quarter, 37-17.

King finished her night by draining a final three-pointer to open the fourth and then came out for a seat on the bench as coach Kelvin Hayes began to substitute liberally. Morgan Mazyck then scored on a baseline put-back and Dawaunti Combs, who suffered through foul trouble, knocked down a three-pointer. A free throw from Anna Bass was the only points of the period for the Aces as Bertie cruised to the 34 point win.

Bertie (6-1) is now off until the News-Herald Holiday Classic on Dec. 27 at 4 pm against an opponent still to be determined.