WINTON – A Windsor man is behind bars here, held without bond, in a murder that occurred in Hertford County this past weekend. 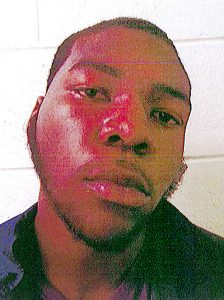 Parker, who was arrested Wednesday night at his Windsor residence, was also charged with possession of a firearm by a convicted felon, and larceny of a motor vehicle. He was scheduled to make his first appearance on Friday in Hertford County District Court.

The case began with Sunday’s discovery of an unidentified male found shot to death at the Harrellsville boat landing. That led Hertford County deputies to begin an effort to first identify the victim before beginning to put the pieces together to what led up to his death.

“It was a fairly intense two days of work to gain knowledge of the murder victim’s identity,” Hayes said. “After learning the victim’s identity we were able to proceed with this case in a positive fashion.”

The first big break came Tuesday with the discovery of Smiley’s vehicle. Hayes said it was located at the dead end of a dirt path in a residential neighborhood in Windsor.

Hayes would not say if the location of the vehicle was near Parker’s residence.

He confirmed that Parker used a shotgun to murder Smiley and that the homicide did take place at the boat landing just outside of Harrellsville. Smiley’s body was found there Sunday before 9 a.m.

The SBI’s Crime Scene Unit was dispatched to obtain evidence crucial to the case from both the boat landing and from Smiley’s vehicle once it was located, Hayes said.

No motive has been established in the murder.

“That part of our investigation is still ongoing,” Hayes remarked.

“Our hearts go out to the victim’s family….his mother, grandmother, brother….I know they’re hurting right now,” Hayes continued. “It’s so sad to see a person’s life ended in this way at such an early age. We worked this case hard to help bring some measure of justice for the victim’s family.”

Hayes commended his officers who worked the case – Lt. Tom Helms, Investigator Johnny Joyner, Sgt. Scott Cofield, and Investigator Keith Lassiter. The Sheriff himself along with Chief Deputy Will Liverman were also heavily involved in the investigation.

He thanked Bertie County Sheriff John Holley and his investigators – Lt. Matt Roebuck, Sgt. Martin Phelps, and Investigator Harris Williams – along with Windsor Police Chief Justin Jackson and his staff for their help.

‘Having those resources available from another jurisdiction really benefits a small department like ours,” Hayes noted.