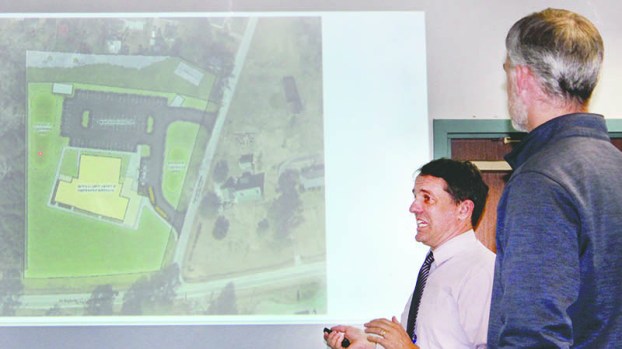 Architect Albi McLawhorn (left) of MHA Works is assisted by Scott Anderson during an update presentation on the new dual facility before the Bertie Commissioners on Dec. 13. | Staff Photo by Gene Motley

WINDSOR – Members of the Bertie County Board of County Commissioners met last week with architect firm MHA Works of Greenville for an update on the design and site layout for the county’s new Public Library/Cooperative Extension Service office complex.

The new facility will be a dual-complex, and would replace the two separate structures downtown that were damaged in 2016 by Hurricane Matthew. It will be located on four acres at So. King Street (US 17 E. Business) near the intersection of Lancaster Avenue.

While there was concern over the distance from downtown Windsor, the fact that both structures – the old Lawrence Public Library of the Albemarle Regional system, located on E. Dundee Street; and the Extension Service office on W. Dundee – had both been victimized multiple times by flooding weighed into the final decision on the location near Vidant Bertie Hospital. The county closed on the new property in June 2018.

Albrecht (Albi) McLawhorn, of MHA Works’ Greenville office and the principal architect on the project, briefed the Commissioners in a special work session, continued from their regular Dec. 3 meeting.

McLawhorn presented the updated site plan and schematic conceptual design for the Lancaster property in follow up to an earlier Commissioners workshop held in late July, but due to have been presented in September, and deferred due to storm preparations for Hurricane Florence. The Commissioners were meeting to consider approval of an authorization for preparation of construction documents, including an addendum/alternate for a community meeting space, additional parking, and topographical layout (shrubbery).

Commissioner chair John Trent proposed the possibility of additional space to the proposed 60 feet of parking currently allocated by another 30 feet. Instead of any lot increase located east of the building near current Terry Ave. home sites, the Board requested the architects consider shifting the building slightly more toward King Street, with that area available for more parking.

The Commissioners also listened to the recommendation for a community garden as part of a 4-H project through the Cooperative Extension service.

McLawhorn said construction documents are 80 percent complete as of mid-December and would be finalized by the end of February 2019. He said he also hoped the permit review, assuring that all code requirements have been met, could be done within a relatively short window (10-30 days). He further noted that no open contractor could be considered until all permits had been reviewed.

“We make an appointment and then sit down face-to-face for the review,” McLawhorn stated. “Now, there is a cost implication involved, and that all has to be met before a contractor can be hired.”

A normal review could take up to more than 120 days, or about four months. Cost for this review would be about $500; whereas, an expedited permit review could be accomplished within the 10-30 day window, but the cost to the county would be $4,000.

“I think the expedited review would be the best option,” said Trent.

“We do need to get these construction documents completed, and quickly, with factors such as weather involved,” said Commissioner Ron Wesson.

Following the review, bids would be then be submitted within the 30 day window of late March-early April 2019; and once approved, construction would begin in May 2019, with the facility completed in summer (June) 2020.

McLawhorn closed with renderings of various construction materials to be considered for roof and wall design from low-end cost to the more expensive.

“Everybody agreed that time was of the essence, given all the challenges we have with weather in this area,” said Bertie County Manager Scott Sauer.

MHA Works will return to make their final presentation of materials for approval before the Commissioners at a 2 p.m. work session meeting on Jan. 14.

“Upon final approval, they can then go to bid,” assured Sauer.

A motion was made and seconded to approve the design and site layout as drafted and discussed with the architects. allowing for the project to proceed with its preparations of construction drawings, permit review, and with the bidding process to commence in Feb/March of 2019.

The motion passed by a 4-0 vote, as Commissioner Ernestine Bazemore was not present due to an approved absence.

WINDSOR – An Aulander man will spend the rest of his life behind bars. A jury delivered a guilty verdict... read more