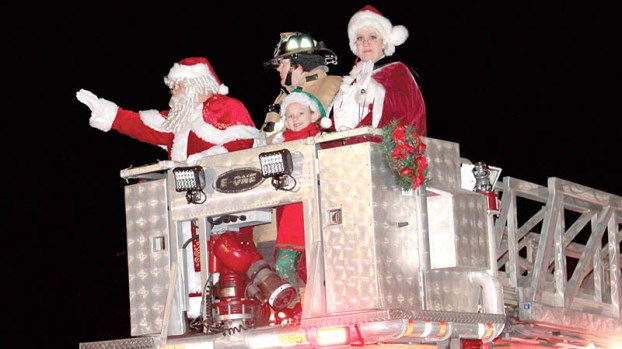 Shown here are several entries into the annual Murfreesboro Christmas parade, held on Tuesday evening along Main Street. Afterwards, several of the town’s businesses remained opened for shopping and special treats while Santa visited with local children at the Roberts-Vaughan House. | Staff Photos by Holly Taylor

Nighttime is the right time for parade

MURFREESBORO – The Christmas parade is a longstanding tradition. People always gather to watch beautifully decorated floats, coordinated marching bands, shiny fire trucks and police cruisers, and much more as they travel down Main Street of towns across the country.

Murfreesboro’s Christmas parade, however, was slightly different this year from the town’s usual practice. The parade was held at 6 p.m. on Tuesday, Dec. 11, a change from the usual Saturday morning processional.

Daryl Williams, Director of the town’s Chamber of Commerce which organizes the event, said there was a lot of support for shifting the parade to the evening time. He first presented the idea to the Town Council in October, explaining that many businesses located on Main Street were hoping to benefit from the increased foot traffic of parade-watchers.

Many businesses offered specials to parade attendees seeking refuge from the cold temperatures once the event had concluded. Cultivator Bookstore offered free cookies and hot chocolate to customers browsing the store’s shelves. Revelle Realty had plenty of free hot apple cider for anyone who dropped in to view the real estate office’s latest art show of pottery and paintings on display. Tavern 125 restaurant offered free non-alcoholic drinks to parade-goers seeking a nice dinner afterwards.

These were only a few examples of what Murfreesboro businesses had to offer Tuesday evening.

The new event space “135 Events on Main” hosted the Hertford-Gates Relay for Life vendor fair. Proceeds from the fair went towards the annual fundraiser for cancer research. Along with being able to purchase a luminary for next year’s Relay for Life event, visitors could browse through different items for sale including jewelry, Tupperware, homemade preserves, wreaths, and more. Soup and sandwiches were available as well.

Over at the Roberts-Vaughan House, Santa and Mrs. Claus and their little helper elf visited with children eager to share their Christmas wish lists. The North Pole trio spent time on the front steps of the historic building after taking a ride on the Murfreesboro Fire Department’s ladder truck in the parade.

The parade itself featured a multitude of decorated vehicles and floats, all featuring locals happy to share in the holiday spirit by passing out candy and shouting “Merry Christmas.”

“We had 34 entries this year,” said Williams, noting that only four dropped out at the last minute, some due to dealing with the aftermath of the weekend snow storm.

The Chamber Director said he hoped to expand the event next year to include more local stores and restaurants and perhaps a few new parade entries. He noted in particular they want to feature Chowan University again. This year, students were already gone home for the holiday break, so he plans to coordinate in the future so they can participate as well.

“Chowan University is a huge part of Murfreesboro,” he acknowledged.

Williams said this wasn’t the first time Murfreesboro had held a parade at night, but it was the first time in at least a few years. Feedback afterwards, he added, had been very positive and many businesses had reported an increase in customers Tuesday evening.

“The main goal was to get people walking up and down Main Street,” he said.

Despite the chilly temperatures, Murfreesboro residents and visitors did just that, strolling through the small town lit up by not only streetlights but Christmas lights as well, even after the parade was over.

Candlelight Tour takes a step back in time