WINDSOR – An Aulander man will spend the rest of his life behind bars.

Wiggins was arrested and charged shortly after the May 29, 2016 slaying of 29-year-old Teffine Williams.

After the guilty verdict was read in court on Thursday, Senior Resident Superior Court Judge Cy A. Grant, Sr. sentenced Wiggins, age 59, to life in prison without the possibility of parole.

In presenting the case, Scott put forth evidence that showed the defendant and the victim had befriended each another, and were both present at a cookout earlier in the day on May 29, 2016. 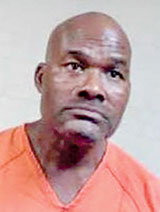 Shortly after the cookout ended, witnesses saw Williams stumbling out of Wiggins’ residence at 512 West Main Street in Aulander. She had been stabbed multiple times. Witnesses also testified that Wiggins was trailing Williams as she exited him home and into the yard. He was naked, witnesses said.

Williams died as a result of 26 knife wounds to her body.

“I am glad the criminal portion of this ordeal is over for the family of Teffine Williams,” said local District Attorney Valerie Asbell. “I know the emotional toil these trials take on the families and I appreciate so many family members and friends being in the courtroom during this difficult time. I hope this verdict will help give them some closure and start the healing process as far as the criminal case is concerned. We will continue to pray for Ms. Williams’ family.”

Asbell praised Scott for the job she did in preparing this case for trial.

“ADA Scott is a diligent and dedicated public servant and spent countless hours preparing this case for trial and did an excellent job presenting this case to the jury,” Asbell noted.

“I would like to thank the witnesses who were willing to come to court and testify in this case,” said Scott. “With the support of the witnesses, and hard work by law enforcement, the State was able to continue to protect Bertie County from this violent offender being released back on to the streets.”

“I want to commend Detective Harris Williams and Deputy Naomi Mizelle, both of the Bertie Sheriff’s Office, for all of their hard work during this case,” Asbell remarked. “I would also like to especially thank Special Agent Colleen Cloutier, Special Agent Joe Bode, and Special Agent Robert Evans from the North Carolina State Bureau of Investigation for an excellent job during the investigation and during the trial of this matter. Working together, these two departments were able to thoroughly investigate and put together a case that ended in a guilty verdict by a jury.”

For Wiggins, this latest conviction is another of a long list of crimes he has committed over a stretch of nearly 40 years.

His most serious charge, prior to the murder of Williams, came in Pasquotank County where he served 14 years of a 40-year term in prison for second degree rape followed by a consecutive six and one-half year term (of a 20-year sentence) for 2nd degree sexual offense. He was released from prison on Oct. 8, 2012, according to information on the North Carolina Department of Public Safety’s website.

He is also listed on the NC SBI’s Sex Offender Registry.

His first run-in with Bertie County law enforcement came in 1981 at which time he served seven months for felony forgery and felony uttering a forged paper.

In 1983, Wiggins was sentenced to 12 years in prison followed by 90 days of parole for 2nd degree sexual offense in Bertie County. He served five years and one month behind bars for that crime, released June 30, 1988.

Twenty-four days later (July 23, 1988) while still on parole for the sex offense case, Wiggins was back in jail again in Bertie County, this time on the charge of felony breaking and entering. He was convicted on Jan. 31, 1989 for the B&E case and sentenced to 10 years, but only served three years and two months in jail for that crime and the parole violation.

WINDSOR – Battle lines are drawn as Vidant Health officials attempt to protect their operating margins that are under attack... read more