AHOSKIE – It was only close early.

“We had pre-game jitters, and we started out sluggish,” said Simmons afterward. “Overall, it was a good win for us.”

Bears Jaheim Wiggins started things off for the home team with an early long range jumper before Shawn Smith got the only tie of the game when he answered for Northampton. Wiggins next stepped behind the three-point arc for his next shot and the rout was on from there. The senior buried another trey and accounted for all of his team’s scoring in an 8-4 start.

With nothing clicking from the outside, Northampton tried to attack the rim, but the Bears’ collapsed and snagged 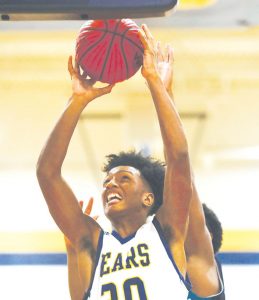 Hertford County’s Michale Cooper snags a rebound over a Northampton County defender in the season debut for the Bears. HCHS made it a winning opener as they topped the Jaguars 79-34. | William Anthony Photography

easy defensive rebounds which they turned into fast-break lay-ups. Quinton Wright buried a three-pointer just before the horn and the Bears led 20-8 after one quarter of play.

An early 8-2 run by the Jags got them within four at 22-18 before the Bears put together a run of their own, outscoring the visitors 11-4, thanks to Wiggins staying hot on the perimeter. The two teams went to the locker room with Hertford County ahead 35-24 at the half.

The Bears continued to pour it on in the second half, and got their lead up to 20 points midway through the third quarter, 48-28, on a Michale Cooper layup. Cooper and Latrell Shaw closed out the Bear scoring with four more points for a 52-28 lead headed to the fourth.

While the Jaguars’ outside shooting woes continued, the Bears continues to rain down three-pointers as Rodgers connected on his first varsity trey and Daylan Askew, on his way to scoring honors with 20 on the night, smoked in two triples in a row. Northampton only scored six points in the entire quarter as Hertford County closed the game on a 10-0 run to post the 45-point victory.

“We did a better job in the second half defensively,” added Simmons. “And we were much better at finishing our fast break.”

The Bears had little time to celebrate, as they participated in the ‘Good Guys vs Cancer Showcase’ in Kill Devil Hills on Saturday and fell to Camden County 66-62. Hertford County (1-1) was back home last night (Tue.) hosting Gates County while Northampton (0-1) did likewise with Rocky Mount Prep. Neither game was complete by press-time.