WINDSOR – A hot start, smooth transition game, and pressure defense all added up to a runaway win here Tuesday night as South Central High School knocked Bertie from the ranks of the unbeaten with a 95-57 triumph.

“It was a learning lesson,” said Bertie Falcons interim coach Chris Jordan. “We came out flat, and you need a lot of intensity when facing a team like this.”

Indeed, the South Central Falcons – who lost in the NCHSAA 4A Eastern finals the last two consecutive years – came out as if their 2018-19 mission to get back, or beyond, has begun. Led by junior Day’ron Sharpe – who’s already verbally committed to play for Roy Williams’ UNC Tar Heels in two years – the visitors easily had their way with Bertie.

It was only close in the opening minute-and-a-half. Josh Burden got a lay-up in transition for a 2-0 Bertie lead. But, Shykeim Phillips returned the favor, and then stole the in-bounds for another easy two-points for a 4-2 South Central advantage. Deontre’ Bryant buried a three-pointer for Bertie’s second lead before Sharpe made the first of several thunder-dunks that wowed the Falcon faithful. Tyrese Harris’ put back made it 7-6, Bertie, but that was the home team’s last lead.

Attacking the paint, Bertie was forced to foul the quicker Falcons in red and thus began a parade to the free-throw line. South Central buried 10-of 14 foul shots, unanswered by Bertie, and built a 19-7 lead. It grew to 26-12 at the end of the first quarter.

The offensive onslaught continued in the next quarter as South Central outscored Bertie 18-6 to up the mark to 44-18 – five of those points on 5-of-8 shooting at the foul line. When Bertie tried to mount a drive, South Central started hitting from beyond the arc with a trio of three-pointers. It was 55-24 at halftime. 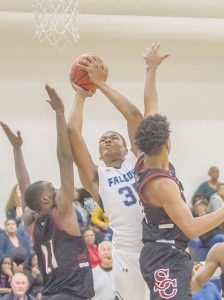 Bertie’s Jaqwan Baylor (in white) is surrounded by South Central defenders in Tuesday night’s game in Windsor. The 4A powerhouse from Winterville manhandled the 2A Falcons 95-57 for Bertie’s first loss of the season. | photomedoc.com / Steven Ferguson

In the third quarter, South Central got it up to a 34-point lead three times before settling for a 75-43 lead headed to the fourth. This, despite Bertie hanging in the game as Burden continued his smooth play for Bertie with 8 of his team’s 19 points in the quarter to only 20 for South Central.

Bertie was determined to hold off on a 40-point lead thus initiating a running clock. They cut it to a 26-point deficit (77-51) before the Falcons in red got it to a 40-point lead with just under a minute-and-a-half remaining in the game; finally posting a 38-point win.

“This team is hungry,” said South Central coach Chris Cherry. “After the way our season’s ended the last two years the guys are driven by a fear of failure; and, it haunts you.”

While South Central rose to 4-0 on the season, Bertie (2-1) suffered its first loss. They now take to the road for their next three games, including a re-match at South Central on Dec. 12.

“The road trip will be good for us,” said Jordan. “We need to re-capture some of the magic.”

AHOSKIE – One big win; one close loss….that sums up the efforts of the junior varsity basketball teams at Ridgecroft... read more