AHOSKIE – An elderly Hertford County man was murdered inside his home earlier today (Friday) and there are persons of interest waiting to be interviewed. 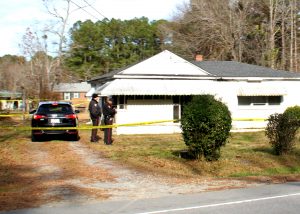 Hertford County deputies stand outside a residence on US 13 South on Friday where an 81-year-old man was found murdered. Staff Photo by Cal Bryant

Hertford County Sheriff Dexter Hayes said the victim is 81-year-old Clarence Simmons, whose home is located along US 13, just south of the LTD Club.

“We are in the midst of a homicide investigation right now,” Hayes told the Roanoke-Chowan News-Herald shortly after 1 p.m. today. “There appears to be no forced entry of the home; nothing appears to be disturbed inside.

“We do have potential persons of interest that we are currently in the process of locating and interviewing,” he noted.

Hayes added that as of early afternoon, investigators were going through the home in an effort to determine if any valuables were missing.

The cause of death was not released.

“We were made aware of this through a call placed to our E-911 Center at 8:17 this morning,” Hayes said. “Mr. Simmons was deceased upon our arrival at the residence just a few minutes later.”

The North Carolina SBI Crime Scene Unit is on the scene at the residence, joining the Sheriff and his investigators.

The R-C News-Herald will have more on this developing story as more details are made available.

Arrest made in Ahoskie murder

AHOSKIE – An Ahoskie man is behind bars without the opportunity for bond after being arrested this afternoon (Thursday) for... read more