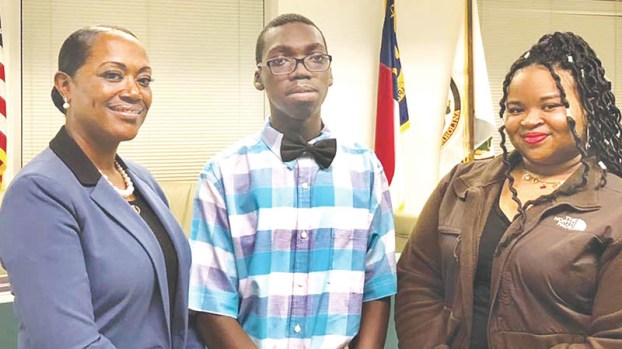 WINDSOR – They spoke of it as if it were a calling.

Two Bertie Early College High School students were sworn in – along with their duly elected adult representatives – as members of the Bertie County Board of Commissioners at the December swearing-in ceremony held Monday in Windsor.

The Junior Commissioners are an extension of the newly implemented Student Government Associations, initiated by Superintendent Dr. Catherine Edmonds. One junior and one senior will serve on the Commissioners board for a one-year term, beginning in December and lasting through June 2019.

Two different students will be sworn in as junior members of the Bertie County Board of Education when it convenes on Tuesday, Dec. 11.

“While the junior board members will not be allowed to vote, they will have a voice and will bring the youth and student perspective to all aspects affecting our county and our schools, and weigh in on all matters brought before each board,” Edmonds said earlier in a news release.

“Mr. Danny Ferry, Kim Cooper, and Amanda Bunch helped create the project for our students,” Edmonds stated after the swearing-in.

“This is where I was born and raised,” stated Joyner, when asked to come before the Board members and the audience and express why he desired to be chosen for the project.

“If I, and my future generation, are going to enjoy this county, then I decided that change had to start with me,” he continued. “So, I decided to take up the mantle of responsibility.”

Pointing to his younger brother, Ty, who was in the audience, Joyner emphasized the change he envisioned had to affect those to whom he had to set an example.

“This is for him, and all the generations that will come after, so that all of them can have a better tomorrow,” he opined. “

Joyner concluded his remarks with a popular Latin phrase, to wit: “Nos viam sternere volunt ut alii sint sequi,” though he could not remember the exact translation.

Joyner pledged to make that saying his loyalty, and the code he would stand by every day.

“I feel like I can make a difference, not only for my age and those of other teens, but for people from Bertie County way older than me, people of every generation,” Williams said in stating her reasoning for desiring the position.

Williams admitted she would be taking a novice approach, but also explained that she had much to learn.

“First, I’d like to see how Commissioners work,” she reasoned. “I’ll be learning, but I also want to find ways to contribute, to make sure everyone is treated fairly, and that everyone has a voice. We have to come together; different sides, different views, and everything.”

“Maybe I can make a change,” she predicted. “A big change that can make everyone happy with what we’re doing here.”

At the conclusion of their remarks, the students then were seated adjacent to the Commissioner’s bench and took in the rest of the evening’s proceedings.