AHOSKIE – One big win; one close loss….that sums up the efforts of the junior varsity basketball teams at Ridgecroft School who both advanced to Friday’s championship round of the 2018 Lt. Nick Brantley Scholarship Tournament.

Caleb Porter scored six of his game-high 20 points over the final two minutes of the second quarter where Ridgecroft rallied from a two-point deficit (18-16) for a 22-18 halftime lead and the Rams never trailed again, pulling away over the game’s final two periods to claim the Brantley Tournament title with a 47-28 win over Pungo Christian Academy.

After Pungo closed to within 22-20 at the outset of the third quarter, Ridgecroft shifted its offense into high gear. The 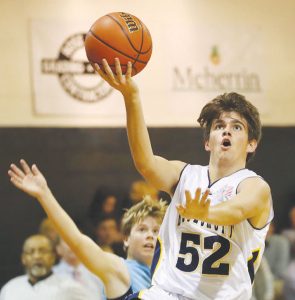 Rams reeled off eight unanswered points on a basket each from Porter, Justin Peterson, and Michael Brown plus an acrobatic, off-balance shot from Bryce Stevens that kissed off the glass and into the hoop.

That 30-20 lead swelled to 40-25 with 1:33 left highlighted by a pair of baskets each from Stevens and Brown. Trailing 9-7 at the end of the first period, Pungo made an offensive push to open the second period. There, an 8-2 run – led by two baskets, both off offensive rebounds – by Edward Credle allowed the Raiders to build a 15-11 lead before Porter heated up his game later in the period to rally the Rams.

Despite not scoring in the third quarter and trailing by five entering the fourth period, Ridgecroft’s jayvee girls had their chances down the stretch, but failed to convert and dropped a razor-tight 29-27 decision to Pungo in the Brantley Tournament title game.

The junior Lady Rams battled to within two points (28-26) with 2:27 left in the game thanks to a basket each from 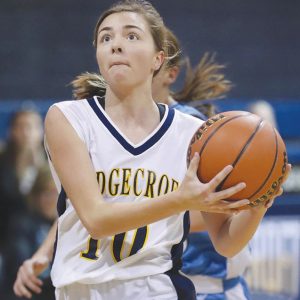 Leah Woodard (#10) of Ridgecroft had six points in the girls title game, but Pungo prevailed over the little Lady Rams 29-27.

MaKenzie Slaughter, Camryn Joyner, and Karley Jo Rose. They then forced a quick turnover after the Rose basket, but failed to cash in that possible game-tying scoring opportunity.

Inside the game’s final minute (still with Pungo clinging to its 28-26 lead), Slaughter forced a held ball on defense and Ridgecroft gained control offensively thanks to a favoring possession arrow. But again they failed to convert that opportunity.

AHOSKIE – The 2018 Lt. Nick Brantley Scholarship Tournament will begin today (Wednesday) at two locations, both here and in... read more