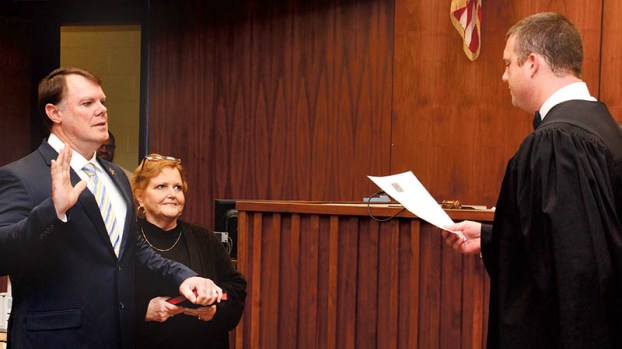 GATESVILLE – Despite being in law enforcement for less than 10 years, Ray Campbell feels the urge to lead.

That became his destiny here Monday morning when the 57-year-old raised his right hand and accepted the oath as the Sheriff of Gates County.

“First and foremost I would like to thank the voters of Gates County for placing their confidence in me to lead their sheriff’s office,” said Campbell, just a few minutes removed from taking the oath of office from The Honorable Judge Meader W. Harriss III. “It’s because of them and the good Lord’s will that I’m here.”

Campbell is following in the footsteps of his late grandfather. Mills Felton was elected as Gates County Sheriff in the mid-1960’s and took the oath of office. But while playing “Santa Claus” during a Christmas parade, he died of a heart attack 18 days later.

How Campbell came into the profession of law enforcement is a unique story of its own.

The lifelong Gates County native worked for 26 years as a Machine Operator at International Paper in Franklin, VA.

“They shut the mill down in 2009; so they shut me down in the process,” Campbell recalled. “I had to look for a new career.”

He enrolled in the Basic Law Enforcement Training program at Halifax Community College in August of 2010. There he was awarded the Most Outstanding Cadet.

After graduation, he joined the Gates County Sheriff’s Office in December of 2010, starting with a job he called a “road deputy.” For the last five years he has continued as a deputy, only this time in the role of School Resource Officer assigned to Central Middle School.

He attributed his fast ascent in the ranks of law enforcement as simply knowing and understanding the collective pulse of his home county.

“Growing up here, knowing so many people and treating them with dignity and respect got me to where I am today,” Campbell stressed. “Being a road deputy allowed me to visit parts of the county I had never been before, and getting to know the people there.”

He shared one story about stopping one afternoon at a trailer park on Middle Swamp Road where youngsters were playing basketball.

“I stopped and played some basketball with them; I enjoy interacting with people of all ages,” Campbell said. “I’ve always tried to be honest and straightforward with people.”

Campbell said he’s ready to, “get to work as Sheriff.”

“There’s a lot of things we can do better as a department,” he stressed.

He has already filled three full-time vacancies on his staff, bringing the Sheriff’s Office up to 12 employees. He added he needs to hire two additional part-time deputies.

“I’m bringing in a new deputy that will serve as the bailiff, he’ll handle all the court duties,” Campbell said. “I also want to appoint one of my deputies as the technician of our evidence room.”

Campbell is hitting the ground running in other areas of the Sheriff’s Office. He is changing the color scheme of the department’s vehicles and is planning to institute a new method on how court is handled.

“I also plan to appoint one deputy to specifically watch over the warrant list and the civil paperwork,” he added.

“The biggest thing I see to address immediately is to ensure my deputies have the equipment they need to do their jobs,” Campbell continued. “We have some equipment now that’s old and outdated.”

Campbell said he plans to use the local newspaper as well as social media to let the county’s citizens know of outstanding arrest warrants as well as his deputies making arrests.

“That really helps us find those we are looking for that have outstanding warrants,” he noted. “I’m going to get a Facebook page up and running for the Gates County Sheriff’s Office.”

Campbell and his wife, Nancy, (his high school sweetheart) have been married for 33 years. They are the parents of a daughter, Elizabeth – an English teacher at an international school in Amsterdam – and a son, Charlie, who works at Newport News Shipbuilding. They also are proud new grandparents (a three-month-old grandson).

Campbell, a deacon at Eure Baptist Church, is a founding member of the Gates County Wounded Warriors Turkey Hunt.