MURFREESBORO – It started with a goose.

Not a live one actually, but one made of cement and clothed in different handmade outfits each month. The goose, a yard decoration that’s somewhat taken on a life of its own, belongs to Murfreesboro resident Trudy Gibson, and it’s the subject of inspiration for her recently released children’s book “Adventures of Miss Patty’s Goose and Other Friends.”

The book contains two parts within: the first tells the story of the goose through illustrations by Gibson’s niece Dianne Evans, and the second features stories of various live birds and their habits which Gibson has witnessed over the years. That part of the book is filled with photography courtesy of Ken Christison.

It’s not a fictional story, Gibson explained, though she did change her and her late husband’s name to Miss Patty and Mr. Ben in the book.

“Those things actually happened,” she said with a laugh about the book’s contents.

Gibson acquired the lifelike decorative bird back in the 1980’s on a trip to Pennsylvania with her husband. They passed 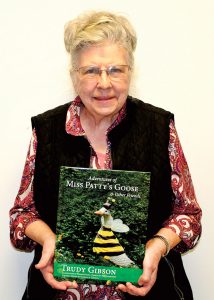 Trudy Gibson holds a copy of her new book – “Adventures of Miss Patty’s Goose and Other Friends.” | Staff Photo by Holly Taylor

by many houses with the same creature resting in the front yard, so they picked up one to bring home as well. Since then, she’s been making outfits for the goose, changing them with the seasons and the holidays.

The goose is sometimes accompanied by little decorations, like a pumpkin at Halloween or a cross at Easter, to complete each look. At Christmas, the goose is flanked by two “reindeer” which are actually plastic geese with deer antlers attached to their heads.

The book overflows with Gibson’s decorative creativity, making it easy for children to learn about different months and holidays as they flip each page.

“There’s so many children that would never see it (the goose), and I just wanted to share it,” said Gibson who lives in Murfreesboro now and previously on Highway 158 just outside of town. “I didn’t publish it for the money.”

She said it took about a year and a half to get the book together in a way she was satisfied with, though family, friends, and neighbors kept encouraging her to continue the project. She worked with former Chowan student Vanessa A. Council for the book’s graphic design. Council had collaborated with Gibson previously on her first book “Heart and Soul” which was a collection of short stories, poems, and songs.

“Heart and Soul” was a project published by Chowan University shortly before Gibson retired in 2012. For this children’s book, however, she turned to a publisher who would help market the book and share it to a wider audience. Upon the recommendation of a friend, she went with Bookbaby Publishing.

On Dec. 2, Gibson’s book will be available for purchase on online stores such as Amazon, Barnes & Noble, Christian bookstores, and more. Additionally, she hopes to have the book available in local stores in Murfreesboro.

The Elizabeth S. Parker Memorial Library will host a book signing event for Gibson at 4 p.m. on Monday, Dec. 10.

“I don’t think it’s really sunk in yet,” Gibson admitted, clearly thrilled by her newest accomplishment. “The bottom line is, I just hope whoever reads it just enjoys it.”

Gibson recalled one of the reasons she kept dressing up the goose year after year is because of a conversation she had with her neighbor a few decades ago. The neighbor had cancer and often traveled past Gibson’s house on her way to and from her doctor visits. She told Gibson that she always looked for the goose as she went by the house.

“No matter how I feel, I always want to see it. Don’t you ever stop dressing that goose,” Gibson remembered her saying. “Because it just makes me feel good and I’m sure other people do too.”

Some of the paint has chipped off of the cement bird over the years, but that doesn’t stop Gibson from diligently dressing it up each month in an array of colorful garments. And with Gibson’s goose now immortalized in a children’s book, that legacy is sure to live on to bring joy to many others.

WINDSOR – It could be described as perhaps the world’s best civics assignment outside of the classroom. This month, both... read more