Mrs. Rascoe was born in Pasquotank County on February 18, 1932, and was the daughter of the late Braxton Bragg Dawson, Sr. and Edna Jones Nixon Dawson. She was baptized, confirmed, and married in Christ Episcopal Church in Elizabeth City.

Attending the Elizabeth City public schools, she graduated from Elizabeth City High School in 1950, from Saint Mary’s College in 1952, and from the University of Wisconsin at Madison in 1954, with a Bachelor’s degree in Primary and Physical Education. She was a Sister of Delta Delta Delta Sorority. She was later a teacher and girls basketball coach at Norview High School in Norfolk, VA. 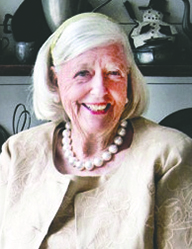 Upon her marriage to Peter Rascoe, Jr., she taught school at Windsor Elementary School, and subsequently at Miss Annie Gray Burden’s Kindergarten, also in Windsor. She was the founder and Head of School of Bucklesberry Play School and Kindergarten in Windsor, and was a volunteer teacher at Lawrence Academy.

In 1992, she and her husband Peter founded the 1812 on the Perquimans Bed & Breakfast Inn in Hertford. The next year they started the Summer Etiquette School at 1812 on the Perquimans. This program ran for 25 years, teaching young ladies and gentlemen proper etiquette, manners, respect for others and themselves, and the social customs important to become successful professionals and business leaders. All her teachings were prompted by her strong belief in Jesus Christ. Later she was volunteer etiquette instructor for the Chowan County Schools. In 2012, she received the Distinguished Alumnae Award from Saint Mary’s School in Raleigh.

Mrs. Rascoe researched, wrote, and published the book, “The Sandy Banks Live On”, an updated history of her own generation’s experiences along the northern Outer Banks of NC, from Wash Woods to Portsmouth Island.

Community involvement included her being a Life Director of The Historic Hope Foundation in Windsor, co-founding the Roanoke-Chowan Mental Health Agency, being certified by the NC Department of Corrections as a volunteer layman in prison ministry, and a member of the National Society of Colonial Dames of America-North Carolina. For all of these things and others, in 2018, she was awarded The Order of The Long Leaf Pine by the Governor.

In addition to her parents, she was preceded in death by her first husband, John Peter Rascoe, Jr.; and by her sister, Tommye Nixon Dawson.

Funeral services will be held Thursday, November 29 at 2:00 p.m. in St. Thomas Episcopal Church, Windsor, by the Rev. Joseph W. Cooper. Burial will follow in the church cemetery. Friends may join the family at the Roanoke-Chowan Heritage Center at Hope Plantation, 132 Hope House Road, Windsor, immediately following the service.

Miller Funeral Home & Crematory, 735 Virginia Road, Edenton, is assisting the family and online condolences may be made by visiting www.millerfhc.com.