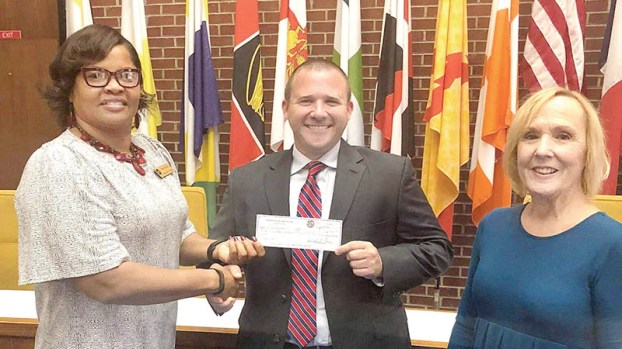 MURFREESBORO – It’s time to upgrade. Thanks to a recent grant from Roanoke Electric Cooperative, the Murfreesboro Police Department is able to do just that.

They received $5,000 from REC’s Operation RoundUp program, a grant awarded quarterly from the local electric cooperative to various applicants in the area. The money will be used to replace laptops in all of the town’s police department vehicles.

“Our laptops in our cars are outdated,” said Murfreesboro Police Chief David Griffith, who noted it had been about 10 years since the equipment had last been replaced.

“We’re able to pretty much do everything in our cars,” he said of the importance of using the laptops in their regular day-to-day police work.

The computers are used to run license plates and records, identify wanted persons, make communication easier with dispatchers, and much more.

Griffith applied for the grant a few months ago, and then received notification of the award just recently. Patrice Jordan, Coordinator of Community Relations/Engagement for Roanoke Electric Cooperative, presented the check to Chief Griffith on Nov. 6.

“I’m excited that we were able to get them that grant,” said Jordan. “We’re thankful we could help assist them. It’ll make their job much easier and simpler while out there protecting and serving our community.”

“I’m just so appreciative that they give back the way they do,” said Chief Griffith of REC. “It helps to be able to provide things that sometimes the budget doesn’t quite cover.”

Operation RoundUp receives its funds from REC member-owners who choose to “round up” their bill each month and contribute that spare change to the program. For example, participants who have an electric bill of $100.75 can choose to round up to the next highest dollar. The extra 25 cents then goes into the Operation RoundUp program.

According to Roanoke Electric’s website, they estimate that a member-owner contributes an average of 50 cents per month or $6 per year. Just a few pennies add up to making a big difference in the local community. REC member-owners interested in signing up for the program can call 252-209-2236 for more information.

The grant is open to applicants in Roanoke Electric’s entire service area, which includes the four counties of the Roanoke-Chowan region. Jordan said a variety of nonprofit organizations—such as youth civic organizations, fire departments, arts groups, and more—can apply for the grant. Recipients are usually focused on providing vital needs to the community in areas such as health, safety, education, or recreation.

REC’s administrative board of directors, known as the Roanoke Care Trust, meet quarterly to decide which applicant will receive the grant.

The Aulander Police Department recently also received the same award from REC. They used their money to purchase body armor for their officers to keep them safer in the line of duty.

Two motorists and one pedestrian were killed on Roanoke-Chowan area roadways during the Thanksgiving holiday period. A single car accident... read more