History on a stick

WINDSOR – He was, in the words of his family, ‘the last rock of his generation’.

But, the Rev. Aaron Bazemore – Elder Bazemore to members of his flock – was also a trailblazer, not merely in Bertie County, but across North Carolina, the Southeast, and the rest of the country.

Bazemore, who died in 1992 at the age of 111, founded the first Church of God in Christ (COGIC) church in the state of North Carolina. A predominantly African-American Pentecostal Holiness denomination, it is headquartered in Memphis, TN; and nationwide its membership now numbers over 6.5 million worshipers. 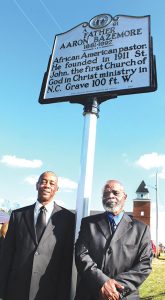 Grandsons Aaron Bazemore III (left) and Tommy Bazemore stand beneath an historic highway marker on NC 308 near Windsor, dedicated Nov. 17 to their grandfather, Rev. Aaron Bazemore, founder of the first COGIC church in North Carolina. The steeple of Bazemore Temple church is shown in the distance. | Staff Photos by Gene Motley

Born and educated in Bertie County, Bazemore worked in local log woods and sawmills in Bertie and Chowan counties, and for a time he lived in Tidewater Virginia.

It was during the early 20th century after his return to his birthplace that what began as a small gathering in the Bazemore home grew into what’s believed to be the first COGIC church in the Tar Heel state.

In 1918, Bazemore and his congregation purchased a plot of land at the fork of what are now Governor’s Road and Republican Road, northwest of Windsor on NC 308. That church, first known as St. John, later became Cedar Fork Church, and finally, in 1980, renamed Bazemore Temple COGIC in Bazemore’s honor.

In addition to the founding of his own church, Bazemore also helped build other churches, including Mt. Ararat Missionary Baptist Church, also in Windsor; and two more COGIC churches in Washington, another in Windsor, and in Greenville. He also pastored two other COGIC congregations elsewhere in the state.

With so much rich history to his name, several of Bazemore’s church members wanted something more than a granite gravestone to mark his accomplishments.

That’s when more than 100 persons gathered on the grounds of Bazemore Temple for the unveiling of a roadside highway marker from the state’s Department of Cultural Resources, and located 100 yards from the Bazemore gravesite at the church.

The move to erect the memorial was spearheaded by former church member Roseva Gilliam. She is also Bazemore’s great-grandniece.

“I wanted it placed directly across from his tombstone,” Gilliam said afterward. “It just drew a closeness to him, that just helps to show ownership.”

Gilliam had been seeking to spur interest in such a project for over 15 years. She even enlisted the aid of the county’s own Historic Hope Foundation, but there still was a waiting period.

“Obviously, we can’t mark all historic places in North Carolina,” said NC State history professor, Dr. Katherine Charron, a member of the Historic Markers Commission who attended the ceremony. “To do this would be impractical and beyond the scope of the program.”

For residents, the presence of a state marker in their community can be a source of pride, a signal that an event of historical significance took place very much close to home.

There is a criteria; an individual must be deceased for a period of at least 25 years, and the subject matter must have significance and an impact on history, primarily in North Carolina. Prices can range from $600 to $4500, depending on the wording on the raised cast aluminum.

Aiding in the selection process, once Bazemore’s name was placed in nomination for a marker, was Bertie County native and chair of the Department of History at North Carolina A&T State University in Greensboro, Dr. Arwin Smallwood; one of the foremost historians of this region.

“This is the ninth marker erected in Bertie County,” said Smallwood, who along with Charron, is a member of the 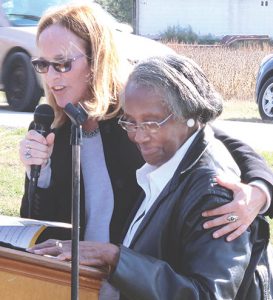 selection committee. “While they never tell the entire story, they are done with the hope that they inspire travelers to ask questions about these individuals and circumstances. Anyone is free to submit a proposal for a marker, and the committee reviews all marker requests. But it is a high standard for the marker to be approved and maintained by the state.”

The markers are maintained by the state Department of Transportation Highway Division’s Traffic Engineering Branch.

“It is my hope, on behalf of the commission, that this marker plays a part in insuring that Father Aaron Bazemore is remembered for generations to come for his many contributions in the establishment of the Church of God in Christ in the state of North Carolina,” Smallwood added.

“I’m just one of those persons who just wants to know more,” said Gilliam. “Father Bazemore was one of the first ones to get school buses for certain areas of Bertie County. Lots of times we just see somebody being buried; but sometimes that somebody is someone you may have ties to.”