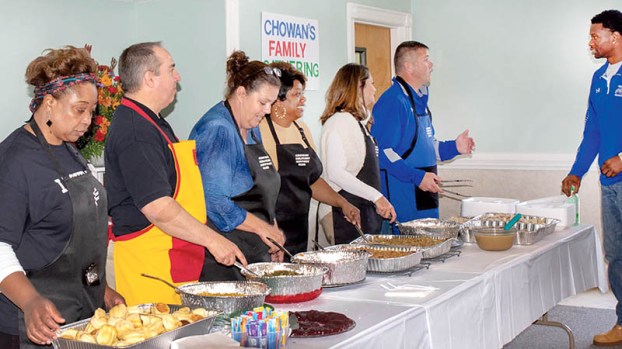 MURFREESBORO – Thanksgiving Day holds a special meaning to many people. On Thursday, Nov. 22, Chowan University hosted a family gathering to provide a complete traditional Thanksgiving feast to many of the students. In true Thanksgiving Day tradition, the NFL football game was displayed on a big screen to watch while eating.

While many local students headed home for the holiday, some were able to stay and attend the event. Family is not always defined by ancestry, but rather by bonds created by relationships that are built over time. First responders were also invited to join in the meal.

Murfreesboro Baptist Church was gracious in allowing their facilities to be used to provide a home-cooked meal for those in attendance. Various desserts were donated by Chowan University faculty and staff.