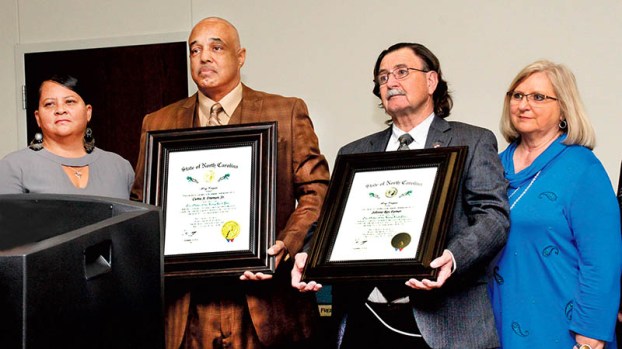 Thanks for your service

WINTON – It was enough to make a grown man cry.

With a combined 38 years of service under their belts, Hertford County Commissioners Curtis Freeman Sr. and Johnnie Ray Farmer were seated for their final meeting here Monday night, a bi-monthly gathering where the agenda was dominated by words of thanks for the two veteran leaders as well as a few surprises thrown in.

While both were presented with plaques of appreciation for their years on the board (20 for Freeman and 18 for Farmer), they each shed a few tears when Howard Hunter III, a former Hertford County Commissioner who is now the District 5 member of the NC House of Representatives, awarded the duo with the prestigious Order of the Long Leaf Pine on behalf of Gov. Roy Cooper.

“And ya’ll thought I was here to give a state legislative update,” chuckled Hunter. “Well, we’re not in Raleigh; we’re in Winton where you two have done so much for all the citizens of this county for a lot of years.

“I served on this board for 10 years with Curtis and Johnnie Ray; we may have not always agreed on things, but we never left a meeting upset; we left on the same accord.”

Turning the floor over to Commission Vice Chairman Bill Mitchell, he presented the duo with their service awards from the county. Before he performed those duties, County Manager Loria Williams offered remarks.

“They were part of this board when I was first hired,” she said. “They gave me the opportunity; they put their trust in me and that’s something I’ll never forget.

“It’s been a pleasure to work for you and alongside you,” Williams added.

“These plaques are just a small token of our appreciation to your long service to this county; you both are dedicated public servants,” said Mitchell during his presentations to both men.

“This is bittersweet,” said Farmer. “The good Lord has given me the strength to serve. I thank my family for allowing me to serve. I thank this board for all the things we’ve been able to accomplish during my time on the board. That also goes to our county manager and our county attorney, Chuck Revelle. I also thank the employees of Hertford County….we’ve got the best in the world.

“I have thoroughly enjoyed serving this county,” Farmer added. “I’ve done it to the best of my ability and with God’s help.”

Turning to the trio of commissioners still seated on the board – Mitchell along with Ronald Gatling and John Horton – Freeman encouraged them to, “keep the citizens first. They are why we do what we do.”

He recognized his family members in attendance, saying, “Without them I couldn’t have done this.”

Hunter returned to the podium and asked Freeman and Farmer, and their respective families in attendance, to join him.

“On behalf of the citizens of Hertford County, the North Carolina General Assembly, and the Governor of our state, it is my honor to hereby present and confer to Curtis A. Freeman Sr. and Johnnie Ray Farmer the Order of the Long Leaf Pine,” said Hunter, his voice trembling with emotion.

“Thank you so much for this; this is an award I never thought I’d receive,” Farmer said. “It means so much coming from my good friend, Howard. Your service to this county, past and present, and now to this great state is something I admire. Thanks to you and the Governor for this esteem honor.”

“Like Johnnie Ray, this is an award you never, ever think you are worthy enough to receive,” Freeman remarked. “This means a lot. It means a lot coming from Howard, a person I admire for his service to our state.”

While he was humbled by all the accolades shared to him, Farmer wanted his fellow three commissioners to know they are appreciated as well.

“This is about all of us; I appreciate what we have done together as a team,” Farmer said, focusing his attention on Mitchell, Gatling and Horton. “I’ll be praying for each of you as you continue to make decisions that benefit the citizens of our county.”

Revelle, who has served as the legal counsel for the Hertford County Board of Commissioners for 40 years, praised the outgoing duo for their work.

“I respect both of you so much,” he stressed. “Commissioner Farmer, you dealt with things with a broad and open mind. You are fundamentally fair and always looking at the fine details of decisions that may impact us for the long term. Commissioner Freeman, you impressed me by listening to all sides of an issue before expressing an opinion. You have a tendency to step back and hear from everyone involved before making a decision. You also found common ground when it could be found, and you would also stand your ground when that needed to be done. Those are rare qualities that have served you well.”

The other commissioners also shared their thoughts on serving with Freeman and Farmer.

“I came on this board in 2008; Commissioner Freeman and Commissioner Farmer were already here, and since that time we’ve accomplished a lot, to include this beautiful facility (new county courthouse) we’re in tonight,” noted Mitchell. “We’ve built new buildings; we’ve renovated buildings; we’ve put in water and sewer systems; done all the things that commissioners do. I’m so proud to have served and worked alongside these two outstanding gentlemen.”

“These two men are staples of this county; they have given a lifetime of service,” said Gatling. “I’ve worked with Commissioner Farmer for years, on this board and in our school system. And for Commissioner Freeman, he and I started when we were teenagers, forming a club to try and make a difference for young people. And now here we sit all these years later making decisions that affect an entire county. Thank you both for what you have given to this county.”

“I’ve only been on this board for two years, but was on the school board for 28 years, so I’ve faced you two men a number of times begging for money for our county’s school system,” noted Horton. “You both did an excellent job. You afforded the schools, within reason, what we needed. I thank you for your service.”

As a military veteran (like Farmer) and a member of the law enforcement brotherhood (like Freeman), Hertford County Sheriff Dexter Hayes expressed his gratitude for the two retiring commissioners.

“I’ve known both these gentlemen all my life,” said Hayes. “I’d like to thank you both for believing in me when I was appointed Sheriff. You saw what my vision was for this county. You two, with 20 years on the board and with 18 years on the board, understand the pulse of our county. I hope that one day I can look back, like you two, on a long and successful career. Thank you for all you’ve done for me, for the Sheriff’s Office, and for this county.”

“Don’t think for a single second that Johnnie Ray and I are on our horses, riding off into the sunset, and ya’ll will not see us anymore. This is our county; these are our citizens, and we’re not going anywhere. We’re going to have our eyes on you (the remaining three commissioners),” closed Freeman.

WINTON – When you are operating a shoestring budget, every penny counts. Murfreesboro Mayor Hal Thomas realizes that fact and... read more