Ryan Rowe with 20 points and Noah Lassiter with 14 were leading scorers for NEA, playing their first game since finishing runner-up in the recently-concluded Eric Baggett Memorial Tournament in Askewville.

The Eagles roared out of the gate to a 20-6 lead after the first quarter. The Patriots re-grouped in the next eight minutes and were only outscored 13-10 to trail 33-16 at halftime. 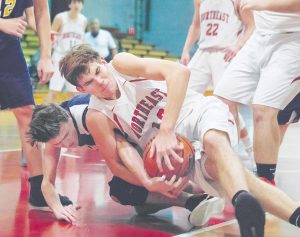 Determination shows on the face of Northeast Academy’s Kendall Timberlake (in white) scrambling for a loose ball in Tuesday’s home game with Cornerstone Christian. The Eagles won 71-36 to up their record on the young season to 2-1. | A.A. Imaging / Andre Alfred

Another good outing to open the second half allowed NEA to move farther out front, 47-25, after the third quarter. The comfortable lead allowed head coach Joe Warmack to clear his bench and every Eagle that dressed out for the game got into the scorebook.

The Lady Eagles (0-3) are still seeking their first win of the season.

The same two teams will meet again in Weldon on Nov. 27.