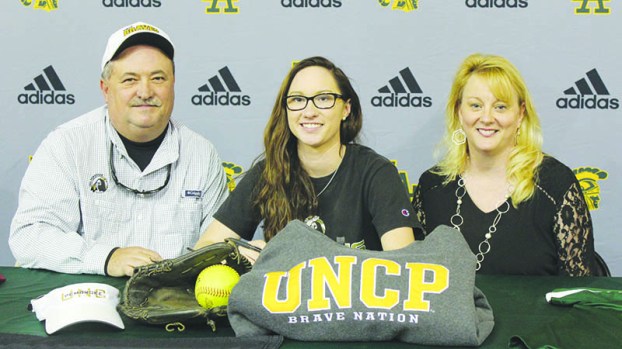 MERRY HILL – She was a published author at age 15.  And now, she’s ready to write a whole new chapter.

With ‘God’s Girl’ as a title, the subtitle of Lauren Baker’s autobiography – written two years ago – is, ‘Living for a Purpose’.

And while some people search for their purpose in life, Baker has found hers … many times over.

Her accolades include National Honor Society, Lawrence Academy Female Athlete of the Year for 2017 & 2018 (the youngest athlete in school history to receive this award), Lawrence softball MVP (2015-2018), Lawrence basketball MVP (2017), All-State Softball and Basketball Team (2017), and Tarheel Independent Conference Player of the Year in softball (2016-2018).

On Nov. 15, with family members, friends, coaches, teammates, and schoolmates on hand, Baker took the first step toward the next phase in her life: signing a National Letter of Intent to attend UNC-Pembroke beginning in the fall of 2018 on a softball scholarship.

“I’ve got to be on the move all the time,” she joked. “You have to live life to its fullest.”

The Windsor native has played sports almost her entire life; and as her aunt teasingly revealed, she’s wanted a ball in her hand just as long. 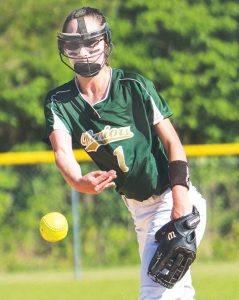 While Gardner-Webb, Mt. Olive, and the College of Charleston were also vying to sign her, she chose Pembroke because it was close to home – and for its smaller enrollment.

Baker hopes to one day become a college softball coach. Interestingly, her current softball coach, Blair Whitehead, is also a product of UNC-P.

“There was some connection,” Whitehead admitted. “I was a cross-country athlete and received both my degrees there. I also went to a private school, and I think when Lauren went for a visit, the coaches kind of put the bug in her ear. I just told her about my experiences and she’s a great fit and she will enjoy it just as I did.”

“I know I’ll have to work my way up,” Baker confessed. “Sports have played an important role in my life up to this point, and I want to enjoy life beyond working behind a desk.”

While the book of Baker’s life includes overcoming eye disease as an infant, then surviving a dog attack where she was actually bitten on the eye, and more recently, in the summer of 2017 she underwent open heart surgery. Through it all she just wants to continue counting her blessings and treasuring every moment.

“It’s been quite a climb,” Baker said. “I don’t think I’d be as strong a person as I am without these obstacles. It’s given me motivation and determination. After my surgery I realized that every day is a gift and it’s really up to you to make it the best you can and to be the best you can be. The sky’s the limit; I’m going as far as I can.”