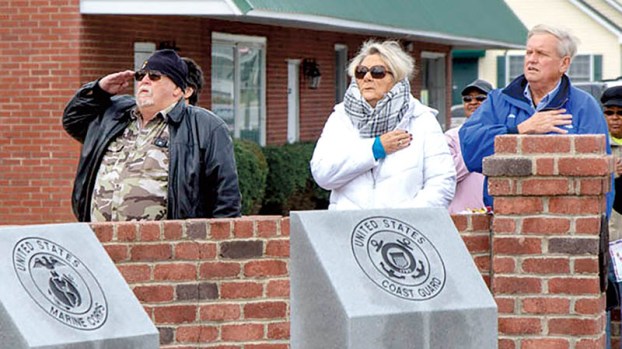 CONWAY – Anyone who passes through Conway on Highway 158 will also pass by the town’s Veterans Memorial Park. The small park is filled with bricks engraved with names of local men and women who have served in the United States military. On Monday morning, the park was also filled with people attending the town’s annual Veteran’s Day ceremony.

“We lift up our voices to express gratefulness and honor to these military troops both from the past and present,” said Town Clerk Robin Maitland during her prayer to open the ceremony.

After those gathered in the park sang the “Star-Spangled Banner” and recited the Pledge of Allegiance, Mayor Tommy Barrett Jr. introduced the guest speaker for the event.

“I’m proud to welcome Richard to speak with us today,” he said of retired Marine Corps veteran Richard A. Todd.

Todd, a native of Bertie County and a current resident of Northampton, served 24 years in the military and attained the rank of Master Sergeant. He deployed to Iraq during the first Gulf War and later during Operation Iraqi Freedom. Over the years, he also served the Marine Corps as a logistics chief, an instructor, and a recruiter.

After retirement, Todd enrolled in Chowan University and graduated in 2015 with a Bachelor’s degree in Math Education. Currently, he works at his alma mater in the Information Technology department and as a math teacher. He and his wife Angie have three children.

Todd’s remarks centered mainly on how he joined the military and what he learned from the experience. 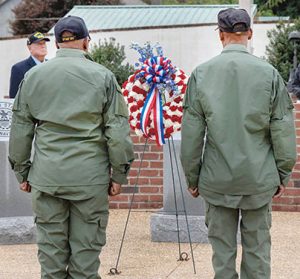 “I was a below average student. I really wasn’t motivated to do a lot other than get a job,” he said about his graduation from Bertie High School in 1985.

His search for a job led him to things such as tobacco farming and carpentry work. In 1987, he decided to join the military, aiming initially for the Army. But his wife’s grandfather, who was a Marine in World War II, convinced him to join that branch instead.

“We also did some humanitarian missions,” he said, mentioning their work to build orphanages and provide food and water to people. “So I look back on it, and I feel good about my time in. I did some positive things. It wasn’t just deploying and fighting the bad guys all the time.”

Todd said his military service instilled a desire to succeed within him, which is why he pursued a college education after his retirement.

During his speech, Todd took a moment to recognize the veterans from all branches of military in the audience. He also held a moment of silence for those who have already passed on. Lastly, he recognized spouses of veterans because “they are sometimes forgotten.”

“Sometimes the easy part was just going out there and trying to stay alive, and they had the hard part which was maintaining the family, maintaining the household. I feel like my job is easy compared to theirs,” he said as he recognized the sacrifices of the spouses of military veterans.

He concluded his speech by thanking everyone for their service.

The Veterans Day event ended with the ceremonial laying of the wreath by brothers George and Lokie Majette, both Army veterans and natives of Conway. Town Administrator Nancy Jenkins offered the closing prayer.

From box car to city streets

By BETTY F. JONES Correspondent AHOSKIE – What was done in a railroad car parked in a forest outside of... read more